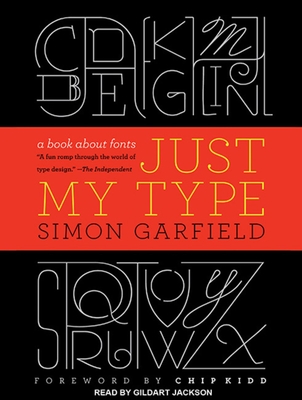 By Simon Garfield, Gildart Jackson (Narrated by)
Email or call us for information about purchasing this item.
Out of Print

Fonts surround us every day, on street signs and buildings, on movie posters and books, and on just about every product that we buy. But where do they come from, and why do we need so many? Who is responsible for the staid practicality of Times New Roman, the cool anonymity of Arial, or the irritating levity of Comic Sans (and the movement to ban it)? Typefaces are now 560 years old, but we barely knew their names until about twenty years ago when the pull-down font menus on our first computers made us all the gods of type. Beginning in the early days of Gutenberg and ending with the most adventurous digital fonts, Simon Garfield explores the rich history and subtle powers of type. He goes on to investigate a range of modern mysteries, including how Helvetica took over the world, what inspires the seeming ubiquitous use of Trajan on bad movie posters, and exactly why the all-type cover of Men are from Mars, Women are from Venus was so effective. It also examines why the "T" in the Beatles logo is longer than the other letters and how Gotham helped Barack Obama into the White House. A must-have book for the design conscious, Just My Type's cheeky irreverence will also charm everyone who loved Eats, Shoots & Leaves and Schott's Original Miscellany.

Simon Garfield is the author of books including "The Error World: An Affair with Stamps" and "Mini: The True and Secret history of the Making of a Motor Car."

With acting credits that span stage and screen, Gildart Jackson is most often recognized for his role as Gideon on "Charmed." Other notable TV roles include Jackson Palmer on "Providence" and Simon Prentiss on "General Hospital," and his theater roles include Henry Higgins in "My Fair Lady," and Adrian in "Private Eyes at the Old Globe."