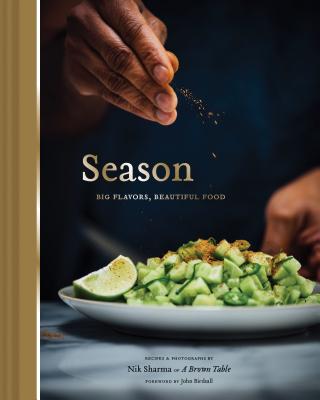 "Quite simply beautiful food-wide-ranging, inspiring, and infused with an enlivening and generous sensibility."—Nigella Lawson, author of At My Table

Includes 100 easy-to-cook and delicious recipes:Season by Nik Sharma features delicious and intriguing recipes plus 270 of the most beautiful photographs ever seen in a cookbook. The bold flavors of Indian cooking combine with familiar ingredients and recipes of the American South and California in fresh ways. Rest assured there is nothing intimidating here. Season, like Nik, welcomes everyone to the table!Named Best Cookbook by The New York Times, The Washington Post, The Boston Globe, The Chicago Tribune, Food Network, Bon Appetit, Food52 (Piglet Finalist), Edible Communities, The BBC, The Independent, The Sunday Times, The Telegraph, The National Post, and The New Zealand Listener.

Season introduces home cooks to a new way to prepare dishes and think about flavor.

Nik Sharma is the writer, photographer, and recipe developer behind the critically acclaimed blog, A Brown Table. His meteoric rise in the food scene has brought him two IACP Digital Media Awards and a Saveur Best Food Blog Award finalist spot.

Nik Sharma is the writer, photographer, and recipe developer behind the critically acclaimed blog, A Brown Table. His meteoric rise in the food scene has brought him two IACP Digital Media Awards and a Saveur Best Food Blog Award finalist spot. Nik's visual food column for the San Francisco Chronicle, A Brown Kitchen, runs weekly in print and online.

"[Nik Sharma brings] together Indian flavors from his hometown of Bombay with those [he] encountered when he moved to the U.S. There's apple masala chai cake, tumeric-and-chile-roasted red snapper with melon salsa, and curry leaf popcorn chicken inspired by his husband's Deep South roots, all illustrated with Sharma's high contrast photos." —Food Wine

"This book is full of mouthwatering recipes that home cooks will actually make and dozens of Nik's breathtaking, low-light images that sit at the intersection of food photography and fine art. More than providing 100 thoughtful recipes, however, Nik encourages us to connect the dots between our cultural foods, memories, and cur­rent geographic location so we may also cultivate a way of cooking and eating that represent who we truly are." —Bryant Terry, James Beard award-winning author of Afro-Vegan

Named one of the Best Healthy Cookbooks Fall 2018 by MindBodyGreen

"Nik Sharma's recipes meld the pantry and techniques of India, the American South, and California; they also have the rare quality of always, always working out exactly as promised. He writes about his interest in "the inherent tension between originality and tradition," which is evident in inspired dishes like a riff on caprese salad, dressed in a tart-sweet tamarind vinaigrette and greened up with cilantro leaves instead of basil." — Helen Rosner, The New Yorker

"I chose Season-for its elegance, it ingenious marrying of compelling, global spices, and, finally, for the semi-calm that pervaded my kitchen as I cooked from it. That hard-to-define-or-describe thing that I love about food has been revealed to me, existing along the lines of strong, persuasive flavors and a feeling of semi-ease that these flavors engender in me. I loved the smell of my kitchen when I cooked from this book, and that made me want to linger at the counter and then, longer, at the table. I happily entered the doorway of Season, and stayed for the story."-Meg Wolitzer, author of The Female Persuasion, The Interestings and The Wife

"Every so often a title shows up that refuses to be cast aside, and Season by Nik Sharma, our very first Cookbook Club pick, is one of them. Flipping through Sharma's recipes for dishes like Chaat-Masala Grilled Pork Chops and Apple Masala Chai Cake will make you want to raid your own spice cabinet for the cumin, coriander, and cardamom (or perhaps go out and stock up on fresh spices, because yes, they go bad!). "—