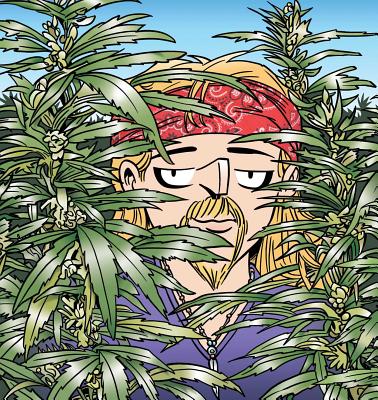 This is book number 36 in the Doonesbury series.

What a long, strange strip it's been!

Doonesbury has managed to be articulate, abrasive, political, compassionate, misunderstood, misprinted, and outrageous—but one thing it's never been is complacent. Garry Trudeau's creation has chronicled American history and culture in a parallel universe. And through it all, Doonesbury has always been honest, entertaining, and way, way cool.

Welcome to the age of pivots. Two centuries after the Founding Fathers signed off on happiness, Zonker Harris and nephew Zipper pull up stakes and head west in hot pursuit. The dream? Setting up a major grow facility outside Boulder, Colorado, and becoming bajillionaire producers of “artisanal” marijuana. For Zonk, it’s the crowning reset of a career that’s ranged from babysitting to waiting tables. For Walden-grad Zip, it’s a way to confront $600,000 in student loans.

Elsewhere in Free Agent America, newlyweds Alex and Toggle are struggling. Twins Eli and Danny show up during their mother’s MIT graduation, but a bad economy dries up lab grants, compelling the newly minted PhD to seek employment as a barista. Meanwhile, eternally blocked writer Jeff Redfern struggles to keep the Red Rascal legend-in-his-own-mind franchise alive, while aging music icon Jimmy T. endures by adapting to his industry’s new normal: “I can make music on my schedule and release it directly to the fans.”

He’s living in his car.


G.B. Trudeau’s Doonesbury is now in its fifth decade, and has chronicled American life through eight presidents, four generational cohorts, and innumerable paradigm shifts. His political sitcom Alpha House, starring John Goodman, is available on DVD and by streaming from Amazon Prime.

For the record, Trudeau always inhaled back in the day. As President Obama once explained, “That was the point.”