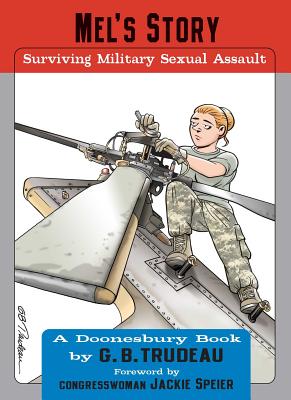 By G. B. Trudeau
$9.99
Email orders@greenlightbookstore.com for information about this item.

This is book number 35 in the Doonesbury series.

The fourth Doonesbury book focusing on the effects of combat on recent war veterans.

"An estimated 19,000 rapes and sexual assaults took place in the military last year. Every one of them represents a monstrous crime made much worse by the sense of betrayal that accompanied it. That so few victims--just one in seven--report these crimes underscores the utter lack of trust that pervades military culture."
-- Retired Gen. Loree Sutton and Garry Trudeau, in a Washington Post OpEd, June 29, 2013

The first time B.D. encounters command-rape survivor Melissa Wheeler in the waiting room at the VA Center, he has no idea what to make of the scowling former chopper mechanic. But in the months that follow, witnessing Mel's pain and her healing process help him with his own, and B.D. ends up a staunch and encouraging ally.

With the help of VA counselors Cora and Elias, Wheeler is able to reframe her experience and move forward to the point where she re-ups and re-deploys, though the trauma and betrayal continue to haunt her. She and battlebud Roz masterfully manage a perilous rescue op of a downed USO chopper, and in the new post-DADT world the now-out Roz and her now-superior ("That's SERGEANT bitch to you!") help wind down US ops in Afghanistan. Returning stateside, Mel's final obstacle is her father's cluelessness--and a widespread reluctance to hear the truth of her story.

As always, Trudeau manages to find humor and humanity in even a tale of suffering, and sheds serious light on one of the most pressing and undermining problems in our military today.