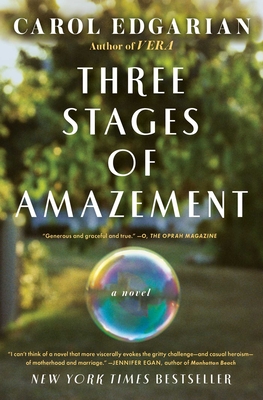 By Carol Edgarian
Click on "Ask A Bookseller" to contact us via email for more information about this title.
Not In Store / May Not Be Available To Order (email orders@greenlightbookstore.com for details)

“I have nothing but praise for this wonderful novel! Edgarian's ability to capture the reality of the everyday routines and dilemmas of her characters results in a powerful connection with the reader. Her interconnected stories grip us not only because of the lessons they teach, but also because of her astonishing skill and wisdom as a storyteller who makes the mundane become so compelling. I truly couldn't stop thinking about these people long after turning the last page.”
— Roberta Rubin, The Book Stall At Chestnut, Winnetka, IL

Set in San Francisco, Three Stages of Amazement takes readers on a spellbinding journey across a landscape of national unease, when the fragility of one marriage reflects the tenuous state of the American Dream. Lena Rusch and her husband, Charlie Pepper, still believe they can have it all—sex, love, marriage, children, career, brilliance. But when life delivers surprises and tests, they must face, for the first time in their lives, real limitation.

Told with eloquence and compassion, Three Stages of Amazement is a true thriller of the heart—about confronting adversity, gaining wisdom, and finding great love.

Carol Edgarian is the author of the New York Times bestseller Three Stages of Amazement and the international bestseller Rise the Euphrates, winner of the ANC Freedom Prize. Her articles and essays have appeared in The Wall Street Journal, NPR, and W, among many others. She is cofounder and editor of Narrative, a digital publisher of fiction, poetry, and art, and Narrative in the Schools, which provides free libraries and writing resources to teachers and students around the world. Edgarian lives with her family in San Francisco.

“Edgarian (Rise the Euphrates) spares no emotion in this big, lovely second novel about decent people falling apart under the demands that there be more than 24 hours in a day and more than parental determination to juggle life's realities against the heart's desire.”
—Library Journal (starred)

“"In what may well be the most serious and the most entertaining domestic novel of the year, San Francisco writer Carol Edgarian delivers a new turn on Tolstoy's old chestnut: "Happy families are alike, but every unhappy family is unhappy in its own way." She calls her book Three Stages of Amazement and sets it in San Francisco toward the end of the "dot com" craze. We meet Lena Rusch, an appealing but harried mother of two whose surgeon husband has been trying, with middling success, to found his own medical device company. The novel deftly dramatizes questions about the essence of married life and throws in a mystery about Lena's origins for good measure. But there's no mystery as to how Edgarian keeps us going - deep insight into human behavior, coupled with the right language to describe it... Beautifully written and deeply engaging.”—Alan Cheuse, NPR’s All Things Considered

“Both an epic love story and a reflection of social anthropology in America today, Three Stages of Amazement is a gracefully rendered narrative of the inevitable joys and heartaches we face in adulthood… Edgarian’s sharp, beautiful prose captures the essence of the human condition in all its pain and glory.”—The Daily Beast

“Lush and elegant… Edgarian is an exceptionally gifted and generous storyteller.”—Associated Press

“Refreshingly grown-up, this love story follows a couple as they deal with the economic crash, a preemie, and an old flame showing up at just the wrong time.”—Good Housekeeping

“Edgarian returns with another potent tale…. The panoramic view Edgarian provides of a culture and people dealing with change is impressive.”—Booklist

"Amazement" is a rare book -- one that can make you laugh, make you cry, and leave you thinking."—San Jose Mercury News

"Set in San Francisco, this rich book by Carol Edgarian evokes all the promise inveterate readers invest in the word "novel." Portraying the "post-blush" of love in a marriage weathered by financial crisis, grief, and the humblings of middle age, Edgarian animates real characters and identifiable lives with uncommon generosity.”—Barnes & Noble Review