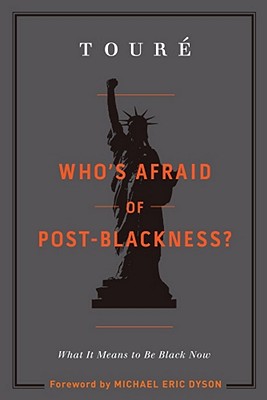 By Touré, Michael Eric Dyson (Foreword by)
$25.00
Email or call for price.

In the age of Obama, racial attitudes have become more complicated and nuanced than ever before. Inspired by a president who is unlike any Black man ever seen on our national stage, we are searching for new ways of understanding Blackness. In this provocative new book, iconic commentator and journalist TourÉ tackles what it means to be Black in America today.

TourÉ begins by examining the concept of “Post-Blackness,” a term that defines artists who are proud to be Black but don't want to be limited by identity politics and boxed in by race. He soon discovers that the desire to be rooted in but not constrained by Blackness is everywhere. In Who’s Afraid of Post-Blackness? he argues that Blackness is infinite, that any identity imaginable is Black, and that all expressions of Blackness are legitimate.

Here, TourÉ divulges intimate, funny, and painful stories of how race and racial expectations have shaped his life and explores how the concept of Post-Blackness functions in politics, society, psychology, art, culture, and more. He knew he could not tackle this topic all on his own so he turned to 105 of the most important luminaries of our time for frank and thought-provoking opinions, including the Reverend Jesse Jackson, Cornel West, Henry Louis Gates Jr., Malcolm Gladwell, Michael Eric Dyson, Melissa Harris-Perry, Harold Ford Jr., Kara Walker, Kehinde Wiley, Glenn Ligon, Paul Mooney, New York Governor David Paterson, Greg Tate, Aaron McGruder, Soledad O'Brien, Kamala Harris, Chuck D, Mumia Abu-Jamal, and many others.

By engaging this brilliant, eclectic group, and employing his signature insight, courage, and wit, TourÉ delivers a clarion call on race in America and how we can change our perceptions for a better future. Destroying the notion that there is a correct way of being Black, Who’s Afraid of Post-Blackness? will change how we perceive race forever.