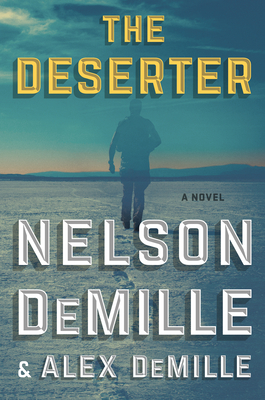 By Nelson DeMille, Alex DeMille
Click on "Ask A Bookseller" to contact us via email for more information about this title.
Not In Store / May Not Be Available To Order (email orders@greenlightbookstore.com for details)

#1 New York Times bestselling author Nelson DeMille, writing with his son, screenwriter Alex DeMille, delivers a blistering new thriller featuring a brilliant and unorthodox Army investigator, his troubling new partner, and their hunt for the Army's most notorious--and dangerous--deserter.
When Captain Kyle Mercer of the Army's elite Delta Force disappeared from his post in Afghanistan, a video released by his Taliban captors made international headlines. But circumstances were murky: Did Mercer desert before he was captured? Then a second video sent to Mercer's Army commanders leaves no doubt: the trained assassin and keeper of classified Army intelligence has willfully disappeared.

When, a year later, Mercer is spotted in Caracas, Venezuela by an old army buddy, top military brass task Scott Brodie and Maggie Taylor of the Criminal Investigation Division fly to Venezuela and bring Mercer back to America--preferably alive. Brodie knows this is a difficult mission, made more difficult by his new partner's inexperience, by their undeniable chemistry, and by Brodie's suspicion that Maggie is reporting to the CIA. With ripped-from-the-headlines appeal, an exotic and dangerous locale, and the hairpin twists and inimitable humor that are signature DeMille, The Deserter is the first in a timely and thrilling new series from an unbeatable team of true masters: the #1 New York Times bestseller Nelson DeMille and his son, award-winning screenwriter Alex DeMille.