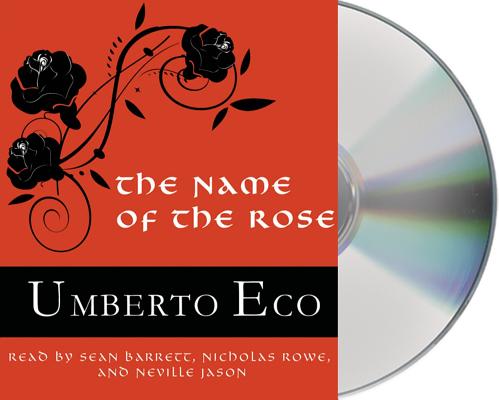 By Umberto Eco, Theodore Bikel (Read by)
Email or call us for information about purchasing this item.
Hard to Find

The international bestseller! A masterful gothic thriller set against the turbulence of medieval Italy.

The Name of the Rose

The year is 1327. Franciscans in a wealthy Italian abbey are suspected of heresy, and Brother William of Baskerville arrives to investigate. But his delicate mission is suddenly overshadowed by seven bizarre deaths that take place in seven days and nights of apocalyptic terror.

Brother William turns detective, and a uniquely deft one at that. His tools are the logic of Aristotle, the theology of Aquinas, the empirical insights of Roger Bacon--all sharpened to a glistening edge by his wry humor and ferocious curiosity. He collects evidence, deciphers secret symbols and coded manuscripts, and digs into the eerie labyrinth of the abbey where "the most interesting things happen at night."

As Brother William goes about unraveling the mystery of what happens at the abbey by day and by night, listeners step into a brilliant re-creation of the fourteenth century, with its dark superstitions and wild prejudices, its hidden passions and sordid intrigues. Virtuoso storyteller Umberto Eco conjures up a gloriously rich portrait of this world with such grace, ease, wit and love that you will become utterly intoxicated with the place and time, in The Name of the Rose.

Umberto Eco was born in 1932 in Alessandria, Italy. He is a professor of semiotics at the University of Bologna, a philosopher, historian, literary critic and aesthetician. He is the author of the international bestselling novels The Name of the Rose and The Island of the Day Before, as well as three collections of popular essays, Travels in Hyperreality, Misreadings and How to Travel with a Salmon & Other Essays. Mr. Eco lives in Milan.

Theodore Bikel began his acting career at the Habimah Theatre in Israel. He went on to study at the Royal Academy of Dramatic Art in London, and appeared in several West End productions, including A Streetcar Named Desire. In America, Mr. Bikel starred in numerous Broadway hits, including The Sound of Music, Zorba and Fiddler on the Roof. He made some 35 motion pictures, and guest-starred in almost every top dramatic television series. He was nominated for a 2010 Drama Desk Award for Solo Performance by an Actor. An accomplished concert and recording artist, Theodore also made many concert appearances, and recorded over 20 albums. His audiobook credits include narrating titles for Orson Scott Card, James Fenimore Cooper, Jack London, and Philip Roth.

“Barrett deftly handles the Latin phrases and the long passages of church history and politics. The general tone is reflective of the quiet monastery setting; however, Barrett finds opportunity for artfully varying the pace and attitude.” —AudioFile Magazine