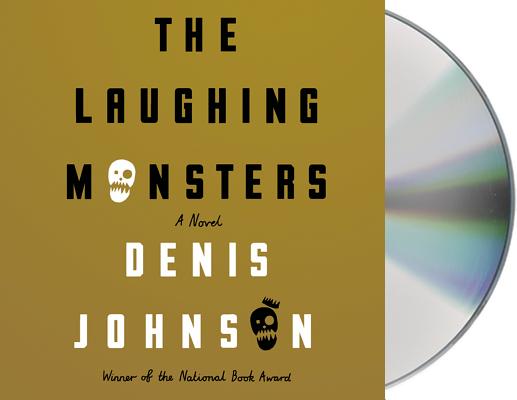 By Denis Johnson, Scott Shepherd (Read by)
Click on "Ask A Bookseller" to contact us via email for more information about this title.
Out of Print / Unavailable

Denis Johnson's New York Times bestseller, The Laughing Monsters, is a high-suspense tale of kaleidoscoping loyalties in the post-9/11 world that shows one of our great novelists at the top of his game.

Roland Nair calls himself Scandinavian but travels on a U.S. passport. After ten years' absence, he returns to Freetown, Sierra Leone, to reunite with his friend Michael Adriko. They once made a lot of money here during the country's civil war, and, curious to see whether good luck will strike twice in the same place, Nair has allowed himself to be drawn back to a region he considers hopeless.

Although Nair believes some kind of money-making plan lies at the back of it all, Adriko's stated reason for inviting his friend to Freetown is for Nair to meet Adriko's fiancée, a grad student from Colorado named Davidia. Together the three set out to visit Adriko's clan in the Uganda-Congo borderland—but each of these travelers is keeping secrets from the others. Their journey through a land abandoned by the future leads Nair, Adriko, and Davidia to meet themselves not in a new light, but rather in a new darkness.

An actor of both stage and screen, SCOTT SHEPHERD is known for roles in the recent films And So it Goes, Side Effects, and Brief Reunion. He belongs to two major theater groups, The Wooster Group and Elevator Repair Service through which he performs both locally and abroad. Shepherd is widely known for his natural memorization skills after he recited the entirety of Fitzgerald’s The Great Gatsby for a Public Theater production of the show Gatz.

“Johnson's tenth novel is a stunner: the story of Roland Nair, a rogue intelligence agent looking to make a big score in Sierra Leone amid the detritus and chaos of the post-war-on-terrorism world. Johnson's sentences are always brilliant, but it is in the interstices, the gray areas of the story, that he really excels.” —David Ulin, Los Angeles Times

“A thriller of spies and black marketeers that's hard to put down for all the right reasons.” —Boris Kachka, New York Magazine

“National Book Award winner Denis Johnson has brilliantly plumbed the mystical and the macabre in such works as Tree of Smoke and his instant classic Jesus' Son. The Laughing Monsters delivers a more commercial, post-9/11 tale of intrigue, deception, romance, and misadventure set in West Africa without losing Johnson's essentially poetic drive . . . With each twist, Johnson deftly ups the stakes while adding to the cavalcade of entrepreneurs, assassins, seers, and smugglers that populate the book, tuning us in to the roiling political realities and cultural complexities of Africa today . . . —Lisa Shea, Elle

“Good morning and please listen to me: Denis Johnson is a true American artist, and Tree of Smoke is a tremendous book . . . It ought to secure Johnson's status as a revelator for this still new century.” —Jim Lewis, The New York Times on Tree of Smoke

“[A] severely lovely tale . . . The visionary, miraculous element in Johnson's deceptively tough realism makes beautiful appearances in this book. The hard, declarative sentences keep their powder dry for pages at a time, and then suddenly flare into lyricism; the natural world of the American West is examined, logged, and frequently transfigured. I started reading Train Dreams with hoarded suspicion, and gradually gave it all away, in admiration of the story's unaffected tact and honesty . . .” —James Wood, The New Yorker on Train Dreams