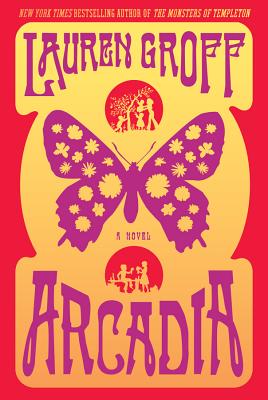 By Lauren Groff
$25.99
Email orders@greenlightbookstore.com for information about this item.

“I am left almost speechless by the beauty and raw reality of this book. The story is centered around a boy named Bit -- nicknamed for his small size. Groff splits the narrative into two parts: in the first, we watch Bit grow up in a utopian wooded commune in the early '70s; in the next part, Bit is an adult, a father raising his own child in New York City. Grofff's wonderful use of language brings us into Bit's world -- the intimacy, wonder, confusion, worry, and unwavering hope he holds as a child and the struggle, shattering grief, and quiet determined bravery he develops as a man. Stunning!”
— Susan McCloskey, Bookshop Santa Cruz, Santa Cruz, CA

From the bestselling author of The Monsters of Templeton comes a lyrical and gripping story of a great American dream. In the fields of western New York State in the 1970s, a few dozen idealists set out to live off the land, founding what would become a commune centered on the grounds of a decaying mansion called Arcadia House. Arcadia follows this romantic, rollicking, and tragic utopian dream from its hopeful start through its heyday and after. Arcadia's inhabitants include Handy, a musician and the group's charismatic leader; Astrid, a midwife; Abe, a master carpenter; Hannah, a baker and historian; and Abe and Hannah's only child, the book's protagonist, Bit, who is born soon after the commune is created. While Arcadia rises and falls, Bit, too, ages and changes. If he remains in love with the peaceful agrarian life in Arcadia and deeply attached to its residents--including Handy and Astrid's lithe and deeply troubled daughter, Helle--how can Bit become his own man? How will he make his way through life and the world outside of Arcadia where he must eventually live? With Arcadia, her first novel since her lauded debut, The Monsters of Templeton, Lauren Groff establishes herself not only as one of the most gifted young fiction writers at work today but also as one of our most accomplished literary artists.

Lauren Groff is the author of The Monsters of Templeton, shortlisted for the Orange Prize for New Writers; Arcadia, a New York Times Notable Book, winner of the Medici Book Club Prize, and finalist for the L.A. Times Book Award; and Fates and Furies, a National Book Award finalist. Her writing has appeared in the New Yorker, the Atlantic Monthly, Harper's, Tin House, One Story, McSweeney's, and Ploughshares, and in the anthologies 100 Years of the Best American Short Stories, The Pushcart Prize: Best of the Small Presses, PEN/O. Henry Prize Stories, and three editions of The Best American Short Stories. She lives in Gainesville, Florida, with her husband and two sons.

"[Lauren Groff] has taken a quaint, easily caricatured community and given it true universality...And a book that might have been small, dated and insular winds up feeling timeless and vast...The raw beauty of Ms. Groff's prose is one of the best things about Arcadia. But it is by no means this book's only kind of splendor."—Janet Maslin, The New York Times

"I was constantly torn between wanting to gulp down this book or savor its lines. Even the most incidental details vibrate with life... Arcadia wends a harrowing path back to a fragile, lovely place you can believe in."—Ron Charles, The Washington Post

"A moving look at the value of human connection in a scary, chaotic world."—Entertainment Weekly

"Lauren Groff's dazzling new novel brings the flawed visions of a '60s commune to life... At a moment when so much floating anger struggles for articulation, it's Groff's essential human empathy that gives her work its urgency."—Vogue

"One of our best young novelists brings a lost Eden of hippiedom freshly to life... Groff's prismatic prose style lends itself to the darker currents that run beneath the Arcadian dream... both poetic and ambitious."—Elle