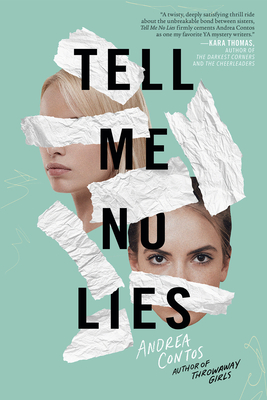 Riverdale meets Gone Girl in a shocking thriller about two sisters whose bond is tested when one girl's boyfriend goes missing... and her sister is the primary suspect.

Nora and Sophie Linden may be sisters, but they're not friends. Not since the party last month. Not since the night Sophie's boyfriend, Garrett, disappeared. Half the town thinks Garrett is dead, the other half believes he ran away, but Sophie knows something no one else does -- Garrett left that party with Nora. And straight-A, Ivy-league-bound Nora had never been to a single party before that night.

Then Nora withdraws, barely coming home anymore, right when Sophie starts receiving messages from someone who claims to be Garrett, promising revenge -- for what happened to him that night, and for the lies both girls told to the police about it.

With the sisters' futures -- and lives -- in jeopardy, they'll have to decide whether to trust each other again, or risk their secrets leading them to their graves.

Andrea Contos is an award-winning mystery and thriller writer. She's the author of Out of the Fire, Tell Me No Lies, and Throwaway Girls. Andrea is the recipient of the International Thriller Writers award for Best Young Adult Novel and her debut was named a Kirkus Best Books of 2020. Andrea was born in Detroit and currently lives outside the city.

Praise for Tell Me No Lies:

"A twisty, deeply satisfying thrill ride about the unbreakable bond between sisters, Tell Me No Lies firmly cements Andrea Contos as one my favorite YA mystery writers." --Kara Thomas, author of The Cheerleaders and The Darkest Corners