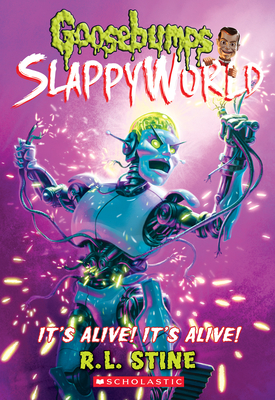 This is book number 7 in the Goosebumps SlappyWorld series.

A brand-new Goosebumps arc narrated by the most iconic and evil character of the series, Slappy!
Livvy and Jayden are the stars of their school's robotics team. Livvy is especially enthusiastic because her own mother works in a robotics lab and experiments with Artificial Intelligence. To impress her mom, Livvy and Jayden build a robot. Livvy wants to name their robot "Francine," but Jayden thinks that's too silly for their creation.

Desperate to win, Livvy and Jayden "borrow" an Artificial Intelligence module. They soon realize they've made a terrible mistake. Francine has too much brain power. She's alive! And using this newly gained brain power to dream up a deadly contest!