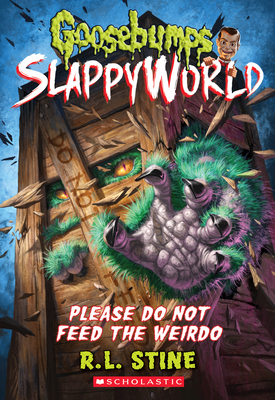 This is book number 4 in the Goosebumps SlappyWorld series.

Robby and his sister Karla beg their parents to take them to a big carnival that has opened on the other side of town. When they arrive, the two kids are delighted by the rides, the sideshow, the interesting displays, and the great food booths.
They wander away from their parents and find themselves at a less-trafficked area at the back of the carnival. Inside a large penned-in area, they see a dejected-looking boy about their age sitting on the grass. A sign on the tall metal fence reads: PLEASE DO NOT FEED THE WEIRDO.
The kids are reluctant to disobey the sign, but the boy seems really nice. Karla hands him her cone through the fence. He thanks her very politely. He eats the ice cream, delicately at first, then ravenously, noisily-and as Robby and Karla stare in horror, he transforms into a raging, hairy beast.

R.L. Stine is the creator of the bestselling Goosebumps series, which has more than 400 million copies in print worldwide and will celebrate twenty five years in 2017. Goosebumps is one of the bestselling children’s series of all-time and inspired a popular television show, as well as a feature film starring Jack Black that opened at #1 at the box office. His other popular children’s book series include Fear Street, Mostly Ghostly, The Nightmare Room, and Rotten School, and his first picture book, with Marc Brown, The Little Shop of Monsters. R.L. Stine lives in New York City. You can connect with him on Twitter @RL_Stine or Facebook: http://facebook.com/rlstine. For more information, visit http://rlstine.com and www.scholastic.com/goosebumps.