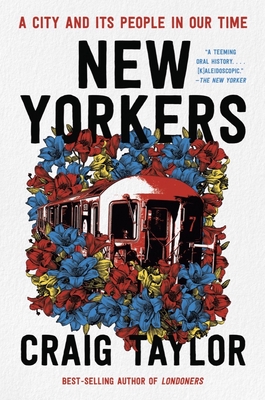 A symphony of contemporary New York through the magnificent words of its people—from the best-selling author of Londoners.

In the first twenty years of the twenty-first century, New York City has been convulsed by terrorist attack, blackout, hurricane, recession, social injustice, and pandemic. New Yorkers weaves the voices of some of the city’s best talkers into an indelible portrait of New York in our time—and a powerful hymn to the vitality and resilience of its people.

Best-selling author Craig Taylor has been hailed as “a peerless journalist and a beautiful craftsman” (David Rakoff), acclaimed for the way he “fuses the mundane truth of conversation with the higher truth of art” (Michel Faber). In the wake of his celebrated book Londoners, Taylor moved to New York and spent years meeting regularly with hundreds of New Yorkers as diverse as the city itself. New Yorkers features 75 of the most remarkable of them, their fascinating true tales arranged in thematic sections that follow Taylor’s growing engagement with the city.

Here are the uncelebrated people who propel New York each day—bodega cashier, hospital nurse, elevator repairman, emergency dispatcher. Here are those who wire the lights at the top of the Empire State Building, clean the windows of Rockefeller Center, and keep the subway running. Here are people whose experiences reflect the city’s fractured realities: the mother of a Latino teenager jailed at Rikers, a BLM activist in the wake of police shootings. And here are those who capture the ineffable feeling of New York, such as a balloon handler in the Macy’s Thanksgiving Day Parade or a security guard at the Statue of Liberty.

Vibrant and bursting with life, New Yorkers explores the nonstop hustle to make it; the pressures on new immigrants, people of color, and the poor; the constant battle between loving the city and wanting to leave it; and the question of who gets to be considered a "New Yorker." It captures the strength of an irrepressible city that—no matter what it goes through—dares call itself the greatest in the world.

Craig Taylor is the author of the best-selling Londoners and the editor of Five Dials. He lives in western Canada.

Books about N.Y.C. risk falling into sentimentality and redundancy, but Craig Taylor avoids both with this absorbing oral history, a collective portrait of the city’s people (and speech patterns).
— Jennifer Schuessler, New York Times

[New Yorkers] is a gift right now, when New York City is coming back from a pandemic winter…In New Yorkers the city is hopping, punching, reeling, dancing, thrumming, honking, thriving…Taylor's presence is felt between the lines; he is as skilled a writer of literary nonfiction as I have ever read.

Thankfully, New Yorkers is not War and Peace, with its several hundred characters. Taylor culled and cut a lot. But among those who made it into New Yorkers, some are unforgettable…Taylor finds stories in the people who navigate the streets.

The people are the texture of New York…and there are 75 of them in New Yorkers, speaking in their own voices of their own experiences. Taylor is Canadian, an outsider: his love of New York is plain, his ability to listen extraordinary.

Ambitious and entertaining…Much of the pleasure of New Yorkers comes from a kind of sly parataxis, the rhetorical trope in which elements are placed side by side, without being overtly connected together.

A fine and fearless follow-up to Londoners—fine because it’s so thoughtful and revealing, fearless because the author’s method is to engage strangers in conversation that quickly becomes oral history…A compelling portrait of New York and a must-read for residents and visitors alike.

An engrossing, multihued ‘oral portrait’ of New York City as told by the people who live there…Expertly edited and arranged, these striking snapshots make clear that in New York, ‘the people are the texture.’ Admirers of the Big Apple will be enthralled.
— Publishers Weekly

A monumental and beautiful testimony to a city and to life itself. Joseph Mitchell, one of the great chroniclers of New York and whose work Taylor wonderfully continues, once profiled an unusual man named Joe Gould who said, more or less, that by overhearing the conversations of New Yorkers you could know the world and all its history. And this is what Craig Taylor has done: not just reveal a city, but the human spirit that lights the city; that spirit, which despite its flaws and madness, seems in the end to always wish to transform chaos and hatred into meaning and love.
— Jonathan Ames, author of The Extra Man

Craig Taylor gets us. His sojourn in New York has resulted in a wonderful portrait of the city and its people, in good times and in bad, living, persevering, triumphant.
— Kevin Baker, author of The Fall of a Great American City

An incredible achievement. Insightful, funny, surprising, profound, moving and honest. This could be the great American novel—and it isn’t even a novel.
— Joe Dunthorne, author of Submarine

Monumental…Every decade or so, a book comes along to define an epoch in New York life: Joe Gould's Secret, The Death and Life of Great American Cities, The Power Broker, Random Family…Craig Taylor’s New Yorkers is one of those. For those newly arrived to the city or long in love with it, New Yorkers belongs on the short shelf of required reading.

As gorgeous, cacophonous, and shocking as New York itself. Like those great oral historians Studs Terkel and Ronald Blythe, Craig Taylor has the gift of drawing out the most idiosyncratic confidences, creating a magical, uproarious and sometimes terrifying portrait of life in the ultimate city.
— Olivia Laing, author of Everybody

Craig Taylor has conducted Gotham’s voices into a gorgeous score…I’ve never heard New York sound this good, this in tune, despite its seas of trouble.
— Leanne Shapton, author of Swimming Studies

New York is nothing if not its people, and in New Yorkers Craig Taylor has given us their voices—wary and wise; insistent or sweet; fast and sage and sometimes oblique; impossible, often, to forget. This is a marvelous portrait of the city now, and bound to last.