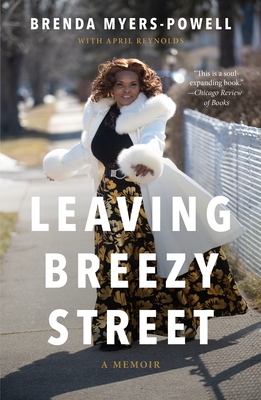 Told in an inimitable voice, Leaving Breezy Street is the stunning account of Brenda Myers-Powell’s brutal and beautiful life.

“Careful—don’t think prostitution is just about money. It’s never just the money. It’s about slipping in at all the wrong places. Getting into dangerous situations and getting out of them. That’s exciting. That’s what you want. But you want something else, too.”

What did Brenda Myers-Powell want? When she turned to prostitution at the age of fifteen, she wanted to support her two baby daughters and have a little money for herself. She was pretty and funny as hell, and although she called herself “Breezy,” she was also tough—a survivor in every sense of the word. Over the next twenty-five years, she would move across the country, finding new pimps, parties, drugs, and endless, profound heartache. And she would begin to want something else, something huge: a life of dignity, self-acceptance, and love. Astonishingly, she managed to find the strength to break from an unsparing world and save not only herself but also future Breezys.

We have no say into which worlds we are born. But sometimes we can find a way out.

Brenda Myers-Powell has been advocating for victims of sex trafficking since 1997. She is the co-founder and executive director of the Dreamcatcher Foundation, and has sat on the board of numerous organizations. In 2020, she was selected to serve on the U.S. Advisory Council on Human Trafficking. Brenda’s work with Dreamcatcher and victims was the focus of the Sundance Award–winning documentary Dreamcatcher.

April Reynolds has taught at New York University, the 92nd Street Y, and is currently teaching creative writing at Sarah Lawrence College. Her short stories have appeared in several anthologies. She has gone on assignment for the US State Department to lecture on creative writing and her own works. Her first novel, Knee-Deep in Wonder, won the Zora Neale Hurston/Richard Wright Foundation Award and the PEN/Open Book Beyond Margins Award. Her second book is The Shape of Dreams.

“Though often devastating, her frank, revealing account is nevertheless infused with warmth, optimism, and hope.”
—Chicago Review of Books

“Myers-Powell inspires readers to root for her as she climbs back to control her own life and become a forceful advocate for fellow survivors.”
—The National Book Review

“If you want a tale that'll drop your jaw every few pages, Leaving Breezy Street is the book to get out.”
—The Miami Times

“Myers-Powell pulls no punches in her piercing debut . . . stirring. This page-turner impresses from start to finish.”
—Publishers Weekly, starred review

“It’s a book that balances hard truths about growing up poor, Black and female in Chicago with the hope that is inherent in Brenda’s extraordinary life story. Playing against survival-memoir type, Leaving Breezy Street is also deeply, genuinely funny.”
—Anne K. Ream, Newcity

“Myers-Powell’s book is a stunning debut; a heartfelt memoir about turning her life around. . . . Told by Myers-Powell with threads of joy and humor woven throughout.”
—Chicago Crusader

“Throughout a life of uphill battles, abuse, and hustling, Myers-Powell has managed to retain her humor, attitude, and fight, all on full display in this stirring memoir. . . . Graphic but never gratuitous, Leaving Breezy Street is engaging and candid. Those who like gritty memoirs will relish it, and it is a perfect nonfiction crossover for urban fiction readers.”
—Booklist

“An earnest memoir of life on the mean streets by the founder of a survivors group. . . . The author’s story, co-written by Reynolds, is consistently frank and often shocking.”
—Kirkus Reviews

“[T]he empowering, steely and emotional update on Myers-Powell’s life today, [is] a tale-within-a-tale that’ll make you teary-eyed. . . . If you want a tale that’ll drop your jaw every few pages, Leaving Breezy Street is the book to get out.”
—Washington Informer

“Brenda Myers-Powell’s story is testament that there are, indeed, second acts in life. Her journey as told in Leaving Breezy Street is remarkable, if not chilling, as she faces a cascade of violence and betrayal, mostly at the hands of men. But astonishingly she never loses her verve or her humor, and emerges on the other side not only intact but as an inspiration.”
—Alex Kotlowitz, author of An American Summer, winner of the J. Anthony Lukas Book Prize

“Through all the love that she’s missed on, Brenda Myers-Powell gives hope. She is a voice for the voiceless. Also she’s funny, she’s intense, she’s retained her soul, and redemption turns her into a potential leader of the most needed kind: she’s real. I hope that the light that Brenda allowed through reaches you too.”
—Mariane Pearl, author of A Mighty Heart: The Brave Life and Death of My Husband Daniel Pearl

“Brenda Myers-Powell has a powerful and true story. From poverty, prostitution and jail, she struggled to become an advocate for trafficked women, a public speaker and now, the author of this deeply moving and amazing book chronicling her unbelievable journey to new life. A testimony to human possibilities in the face of great odds. It’s hard to put down.”
—Edwina Gately, author of I Hear a Seed Growing

“To stand in one truth and allow yourself to be seen is one of the bravest things an individual can do. In her memoir, Brenda Myers-Powell is brave, authentic, and a bit gritty in a remarkable way. At every moment in Leaving Breezy Street you felt you were there, experiencing the pain and finding the resilience to keep pushing to find joy through it all alongside her.”
—Marcus Samuelsson, author of Yes, Chef: A Memoir