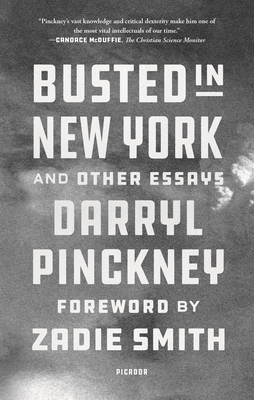 By Darryl Pinckney, Zadie Smith (Foreword by)
$19.00
On Our Shelves Now (while supplies last)

A collection of essays that blend the personal and the social, from the celebrated literary critic and novelist

In these twenty-five essays, Darryl Pinckney has given us a view of our recent racial history that blends the social and the personal and wonders how we arrived at our current moment. Pinckney reminds us that “white supremacy isn’t back; it never went away.” It is this impulse to see historically that is at the core of Busted in New York and Other Essays, which traces the lineage of black intellectual history from Booker T. Washington through the Harlem Renaissance, to the Black Panther Party and the turbulent sixties, to today’s Afro-pessimists, and celebrated and neglected thinkers in between.

These are capacious essays whose topics range from the grassroots of protest in Ferguson, Missouri, to the eighteenth-century Guadeloupian composer Joseph Bologne, from an unsparing portrait of Louis Farrakhan to the enduring legacy of James Baldwin, the unexpected story of black people experiencing Russia, Barry Jenkins’s Moonlight, and the painter Kara Walker. The essays themselves are a kind of record, many of them written in real-time, as Pinckney witnesses the Million Man March, feels and experiences the highs and lows of Obama’s first presidential campaign, explores the literary black diaspora, and reflects on the surprising and severe lesson he learned firsthand about the changing urban fabric of New York.

As Zadie Smith writes in her introduction to the book: “How lucky we are to have Darryl Pinckney who, without rancor, without insult, has, all these years, been taking down our various songs, examining them with love and care, and bringing them back from the past, like a Sankofa bird, for our present examination. These days Sankofas like Darryl are rare. Treasure him!”

Darryl Pinckney, a longtime contributor to The New York Review of Books, is the author of the novel, High Cotton (winner of a Los Angeles Times Book Prize), and the works of nonfiction, Blackballed: The Black Vote and U.S. Democracy and Out There: Mavericks of Black Literature. He is a recipient of the Harold D. Vursell Memorial Award for Distinguished Prose from the American Academy of Arts and Letters. He lives in New York.

"Busted in New York, which collects 25 of those essays from the last 25 years, is not that book. In fact, it is something perhaps even greater . . . Pinckney is a companionable guide to this difficult era . . . As a reporter, on the ground, he is brisk, and leads with his hometown wits . . . There wasn’t a critic in America who could speak with equal measures of warmth and intelligence like Baldwin until Pinckney emerged in his full power in the 1990s." —John Freeman, The Boston Globe

"Fiercely intelligent essays, reportage, and reviews from the award-winning novelist and nonfiction writer . . . A deeply satisfying, beautifully crafted collection of work by a writer of uncommon excellence and humanity." —Kirkus Reviews (Starred Review)

"[Pinckney] reveals himself to be a skillful chronicler of black experience in literary criticism, reportage and biography." —Lauretta Charlton, The New York Times Book Review

"This beautifully written collection of essays by fiction and nonfiction writer Pinckney, longtime contributor to the New York Review of Books, covers a wide range of topics while still creating a cohesive, thoughtful experience for readers. He reflects on experiences, struggles, and accomplishments of black Americans today and historically, exploring the many complex ways people have been impacted by and have responded to racism . . . Though the subject matter is vast, the author’s voice is consistently engaging throughout." —Sarah Schroeder, Library Journal

"Darryl Pinckney’s latest literary compilation places a historical lens on the most pivotal moments in black America. From his examination of race relations during Barack Obama’s presidency to his nuanced analysis of the Black Lives Matter movement, Mr. Pinckney’s vast knowledge and critical dexterity make him one of the most vital intellectuals of our time." —Candace McDuffie, The Christian Science Monitor