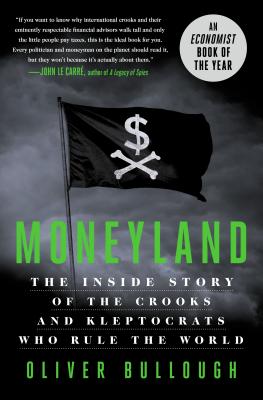 "If you want to know why international crooks and their eminently respectable financial advisors walk tall and only the little people pay taxes, this is the ideal book for you. Every politician and moneyman on the planet should read it, but they won't because it's actually about them." —John le Carré, author of A Legacy of Spies

An investigative journalist's deep dive into the corrupt workings of the world's kleptocrats.

From ruined towns on the edge of Siberia, to Bond-villain lairs in London and Manhattan, something has gone wrong. Kleptocracies, governments run by corrupt leaders that prosper at the expense of their people, are on the rise.

Once upon a time, if an official stole money, there wasn't much he could do with it. He could buy himself a new car or build himself a nice house or give it to his friends and family, but that was about it. If he kept stealing, the money would just pile up in his house until he had no rooms left to put it in, or it was eaten by mice.

And then some bankers had a bright idea.

Join the investigative journalist Oliver Bullough on a journey into Moneyland—the secret country of the lawless, stateless superrich.

Learn how the institutions of Europe and the United States have become money-laundering operations, attacking the foundations of many of the world's most stable countries. Meet the kleptocrats. Meet their awful children. And find out how heroic activists around the world are fighting back.

This is the story of wealth and power in the 21st century. It isn't too late to change it.

Oliver Bullough is the author of non-fiction books on Russian history and politics: The Last Man in Russia, and Let Our Fame Be Great, which was shortlisted for the Orwell Prize in the UK and won the Cornelius Ryan in the US.

Bullough is a writer for the Guardian, and his work has been published by British GQ, The New York Times, and the BBC. He lives in London.

"After years of exhaustive investigative research for the book he also calls 'Moneyland,' Bullough offers not just a bill of particulars spanning continents but a polemic about the dangers of a global cancer that must be exposed and combated... Bullough brilliantly uncovers the scope of hidden money." —The New York Times

"The most eye-opening book that you'll read all year... A must read for anyone who wants to understand how the real world of wealth works." —Inc.

"Moneyland doesn’t care where your money comes from - dictators, sex traffickers, warlords are all welcome in this privileged plane. Bullough dives into that world, combining investigative reporting with smart, deeply-researched analysis, and a twinkling eye for the absurd… a crucial read for anyone who wants to understand how the world really works - and it’s entertaining to boot.” —Quartz

"An eye-opening investigation of the places where dark money goes to hide... Students of the modern economy, to say nothing of politicians and nations for sale, will find Bullough's work fascinating." —Kirkus Reviews

"There are few people who know the world of illicit finance and money laundering like Oliver Bullough. He takes us on a journey through the maze of complicity and criminality that will upend all your confidence in the institutions that should be protecting us." —Bill Browder, author of Red Notice

“Mr. Bullough gives tantalising accounts of two investigations into corrupt behaviour which never saw the light of day because of the mere threat of legal action.” —The Economist

“You cannot understand power, wealth and poverty without knowing about Moneyland.” —The New Statesman

“A concise, confident book ... pacy, clever and entertaining ... if you still have any illusions about the wonders of liberated capitalism, Moneyland will probably cure you.” —The Guardian

"An unflinching account of the power of offshore wealth...Moneyland, a gripping yet dispiriting book, is an excellent addition to the process of relearning these lessons.” —The Times (UK)