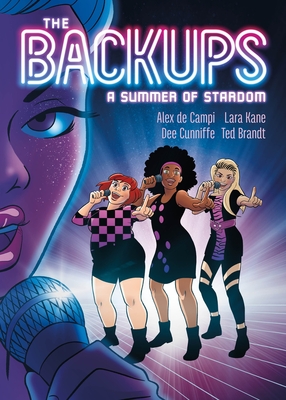 Step into the spotlight with The Backups, a graphic novel from writer Alex de Campi and artist Lara Kane about crushes, confidence, and catchy choruses!

Spending an entire summer on tour as a backup singer for pop star Nika Nitro? What?! That’s the DREAM, right? Especially for Jenni, Lauren, and Maggie, three misfit performing arts students with hopes of making it in the music world.

But being twenty feet from fame isn’t easy. Between crushes, constant rehearsals, Nika’s sky-high expectations, and their own insecurities, this dream is starting to feel more like a nightmare. And that’s before they accidentally start a beef with a rival band threatening to reveal a secret that could end Nika’s career.

Can this trio of new friends come together to save the tour, or will the Backups be kept out of the spotlight forever?

Alex de Campi is the Eisner-nominated writer of Archie vs. Predator, Kat & Mouse, No Mercy, Agent Boo, and Semiautomagic. She lives in Maine with her awesome daughter and two dogs. Find her online on her website and on Twitter!

Dee Cunniffe is an award-winning Irish designer who worked for over a decade in publishing and advertising. He gave it all up to pursue his love of comics. He has colored The Dregs and Eternal at Black Mask, The Paybacks and Interceptor at Heavy Metal, Her Infernal Descent, The Replacer and Stronghold at Aftershock, Marvel's Runaways, DC's Lucifer, and Redneck at Skybound.

Ted Brandt is a UK-based inker, though he works mostly in the American market. He has worked for Action Lab on the acclaimed Raven: the Pirate Princess, as well as Marvel’s Mighty Captain Marvel and Steve Rogers: Captain America. His most known work is the Eisner- and GLAAD-nominated series CROWDED, from Image Comics.