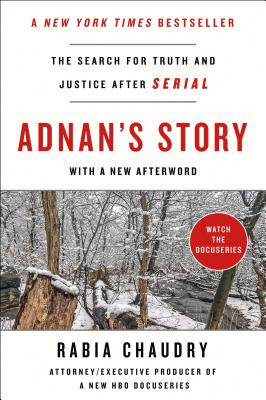 After more than twenty years in prison, Adnan Syed’s murder conviction was overturned, and he was finally set free. Rabia Chaudry’s New York Times bestseller and award-winner Adnan’s Story reveals how the case was mishandled and became the subject of Sarah Koenig’s Peabody Award-winning podcast Serial.

In early 2000, Adnan Syed was convicted and sentenced to life plus thirty years for the murder of his ex-girlfriend Hae Min Lee, a high school senior in Baltimore, Maryland. Syed has maintained his innocence, and Rabia Chaudry, a family friend, has always believed him. By 2013, after almost all appeals had been exhausted, Rabia contacted Sarah Koenig, a producer at This American Life, in hopes of finding a journalist who could shed light on Adnan’s story. In 2014, Koenig's investigation turned into Serial, a Peabody Award-winning podcast with more than 500 million international listeners.

But Serial did not tell the whole story. In this compelling narrative, Rabia Chaudry presents key evidence that she maintains dismantles the State’s case: a potential new suspect, forensics indicating Hae was killed and kept somewhere for almost half a day, and documentation withheld by the State that destroys the cell phone evidence—among many other points—and she shows how fans of Serial joined a crowd-sourced investigation into a case riddled with errors and strange twists. Featuring information about Adnan’s life in prison, and weaving in his personal reflections with never-before-seen letters, Rabia’s account is “a true story about real people. Adnan’s Story adds context and humanizes it in a way that could change how you think about the case and about Serial itself” (Los Angeles Times).

“Chaudry’s clear, vivid and highly readable account of the case will bring the story to life for readers unfamiliar with the podcast, and even the most devoted Serial fans will find fresh insight and a vast amount of new material. Chaudry’s legal training serves her well as she marshals her defense, but so too does the Pakistani heritage and Muslim faith she shares with Syed.” —Washington Post

RABIA CHAUDRY is an attorney and partner at Chaudry & Anwer Immigration Law, a recent Jennings Randolph Fellow at the U.S. Institute of Peace, an International Security Fellow at the New America think tank, and a Fellow of the Shalom Hartman Institute. She is the co-host of Undisclosed, one of the top-ranked podcasts in the iTunes store with nearly 250 million downloads, and The 45th, with over four million downloads. She is a member of the National Muslim-Jewish Advisory Council and the Aspen Institute Vanguard Board. She is a frequent public speaker, and her writing has appeared in numerous outlets including Time.com, The Huffington Post, and the Chicago Sun-Times.

"True crime enthusiasts and anyone willing to delve into the unsettling world of guilt versus innocence will find Adnan’s Story an enjoyable, but heart-wrenching ride. Chaudry has an impressive command of style–using the perfect balance of compassion and investigation to open Syed’s case to the world." —The Lineup

"Rabia put her heart and soul [into this]. This isSerial come to life. If you liked the podcast, you will love this book." —Daisy Khan, WISE

“Chaudry's book is essential reading for anyone who wants to understand how media — particularly social media — came to play such a powerful role in this case . . . Chaudry's passion clearly drives Adnan's Story: The Search for Truth and Justice After 'Serial.' But it's the mix of media skills and legal education that makes her book such an illuminating firsthand report from the front lines of social media change.” —Baltimore Sun

“Chaudry’s clear, vivid and highly readable account of the case will bring the story to life for readers unfamiliar with the podcast, and even the most devoted 'Serial' fans will find fresh insight and a vast amount of new material. Chaudry’s legal training serves her well as she marshals her defense, but so too does the Pakistani heritage and Muslim faith she shares with Syed.” —Washington Post

"Any 'Serial' fan should eat up this heavily researched book." —New York Post

"Rabia Chaudry is a woman on a mission . . . It was easy to forget, listening to 'Serial,' that it was a true story about real people. Adnan's Story adds context and humanizes it in a way that could change how you think about the case, and about 'Serial' itself." —Los Angeles Times

“Adnan's Story should satisfy those who can’t get enough of this perplexing case.”—Newsday

"You’ll find yourself tearing through the book as quickly as you binged on episodes of the podcasts." —Bustle

"As stories of wrongful convictions go, Adnan’s Story is hands down a certain winner." —New York Journal of Books

"Chaudry is uniquely qualified to tell this story." —Elle.com

"A skillfully written account of injustice that will have wide appeal to fans of Serial and readers of human interest stories, and is especially timely as Syed's conviction was vacated in July 2016 and a new trial granted." —Library Journal

"Readers new to the story will have no trouble following—the narrative is outlined extensively from the beginning—and podcast listeners will find plenty of previously undisclosed material...She strongly makes the case for cultural and religious bias in the investigation and conviction and presents damaging evidence of police misconduct, including tampering with evidence and a witness. She also examines other suspects and their possible motives and alibis." —Publisher's Weekly, starred review

"A page-turner...[Chaudry's] writing is clear, eloquent, and engaging, and her case is convincing." —Kirkus, Starred review