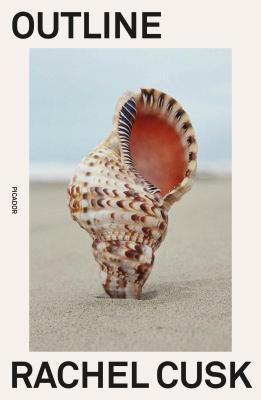 By Rachel Cusk
$17.00
Available In Store Now (while supplies last)

This is book number 1 in the Outline Trilogy series.

A Finalist for the Folio Prize, the Goldsmiths Prize, the Scotiabank Giller Prize, and the Baileys Women’s Prize for Fiction

Rachel Cusk's Outline is a novel in ten conversations. Spare and lucid, it follows a novelist teaching a course in creative writing over an oppressively hot summer in Athens. She leads her students in storytelling exercises. She meets other visiting writers for dinner. She goes swimming in the Ionian Sea with her neighbor from the plane. The people she encounters speak volubly about themselves: their fantasies, anxieties, pet theories, regrets, and longings. And through these disclosures, a portrait of the narrator is drawn by contrast, a portrait of a woman learning to face a great loss.

Rachel Cusk is the author of the Outline trilogy, the memoirs A Life’s Work and Aftermath, and several other works of fiction and nonfiction. She is a Guggenheim fellow. She lives in Paris.

“[A] lethally intelligent novel . . . reading Outline mimics the sensation of being underwater, of being separated from other people by a substance denser than air. But there is nothing blurry or muted about Cusk's literary vision or her prose: Spend much time with this novel and you'll become convinced that she is one of the smartest writers alive.” —Heidi Julavits, The New York Times Book Review

“Outline is a poised and cerebral novel that has little in the way of straightforward plot yet is transfixing in its unruffled awareness of the ways we love and leave each other, and of what it means to listen to other people . . . While little happens in Outline, everything seems to happen. You find yourself pulling the novel closer to your face, as if it were a thriller and the hero were dangling over a snake pit.” —Dwight Garner, The New York Times

“[Outline] is mesmerizing; it makes a sharp break from the conventional style of Cusk's previous work . . . Outline feels different, its world porous and continuous with ours, though not for the reasons we might expect.” —Elaine Blair, The New Yorker

“[A] quietly radical new novel . . . The result, which recalls Karl Ove Knausgaard in its effort to melt away the comforting artifice of fiction, is a kind of photonegative portrait of a women who resists concessions in life and art.” —Megan O'Grady, Vogue

“There are dozens of observations in Outline unexpected enough to stop you on the page . . . Outline has a terribly charged atmosphere, the kind very few novels achieve.” —Charles Finch, The Chicago Tribune

“[A] remarkably original novel . . . [which] offers a bracing indictment of the sentimentality that surrounds the making of art and artistic identity.” —Emily Rapp, Boston Globe

“Cusk's restrained, almost experimental prose is really not so much a novel as a meditation on identity, illusion, and the erausre of self that can occur during a marriage.” —Isabella Bledenharn, Entertainment Weekly (A-)

“Outline, in the most seemingly effortless way imaginable, winds up being completely captivating: the conversations are autobiographies in miniature, with all the holes, lies and self-deceptions lurking in that wily form . . . As you'd expect in a novel so obsessed with language, Cusk's own writing is a pleasure to read -- unfailingly precise and surprising . . . The ultimate and undeniably cerebral pleasure of Outline is it nudges you into being a more attentive reader and listener, more alert to the cracks in sentences and the messier realities that words can only try to contain.” —Maureen Corrigan, NPR's Fresh Air

“Cusk has crafted another captivating vessel for her thoughts on gender, power and storytelling.” —Boris Kachka, New York Magazine

“Interesting and beautifully written . . . The narrator's emotions about her divorce are evinced only by stories about other people's marriages and relationships. The melancholy and dignity of this approach are, by the end, quite profound.” —Marion Wink, Newsday

“A highly sophisticated and deeply affecting look at modern womanhood; but for all its introspection, there's no shortage of wordly, self-deprecating wit, making this read equal parts intellectually challenging and distinctly pleasurable.” —Caroline Goldstein, Bustle

“Cusk spares us from pontification or lofty theorizing, instead couching each conversation in sharp and incisive anecdote. Characters off-stage are palpable, memories unfold with care and precision, and each interlocutor brims with self-reflection . . . Faye's perception, her deft attention, and her exquisite intereference and interpretation make each conversation an arresting and piercing experience for the reader.” —Cecily Sailer, Dallas Morning News

“Outline succeeds powerfully. Among other things, it gets a great variety of human beings down on to the page with both immediacy and depth; an elemental pleasure that makes the book as gripping to read as a thriller . . . a stellar accomplishment.” —James Lasdun, The Guardian

“[T]his has to be one of the oddest, most breathtakingly original and unsettling novels I've read in a long time ... [E]very single word is earned, precisely tuned, enthralling. Outline is a triumph of attitude and daring, a masterclass in tone.” —Julie Myerson, The Observer

“Outline. It defies ordinary categorisation. It is about authorial invisibility, it involves writing without showing your face. The narrator is a writer who goes to teach creative writing in Greece and becomes enmeshed in other peoples' narratives which Cusk stitches, with fastidious brilliance, into a single fabric.” —Kate Kellaway, The Guardian

“Winter bouquets should be offered to the clever and stylish Rachel Cusk: her novel Outline is smoothly accomplished, and fascinating both on the surface and in its depths.” —Hilary Mantel, The Guardian's Writers Pick the Best Books of 2014

“[Outline is] a piece of work of great beauty and ambition. Narratives are smoothed, as if by translation and retranslation, into their simplest, barest elements: parents, children, divorces, cakes, dresses, dogs. These elements then build, layer on layer, to form the most complex and exquisitely detailed patterns, swirling and whirling, wheels within wheels.” —Jenny Turner, London Review of Books

“[T]he most compelling part of Outline is its undercurrent of rage . . . [With] polished, analytical language. Cusk's writing is lovely . . . Outline is a smart ascetic exercise.” —Hannah Tennant-Moore, Bookforum

“Each sentence of Cusk's prose is a revelation about the truths that remain unknowable.” —Brigit Katz, Flavorwire

“[A] uniquely graceful and innovative piece of artistic self-possession, which achieves the rare feat of seamlessly amalgamating form and substance.” —Lucy Scholes, The Independent

“Cusk's uncompromising, often brutal intelligence is at full power. So is her technique . . . I can't think of a book that so powerfully resists summary or review . . . Inevitably, the only way to get close to the fascinating and elusive core of Outline is to read it.” —Sophie Elmhirst, Financial Times

“Never less than compelling . . . material that might have been ponderous in other hands is, here, magnetic, thanks to the mystery at the heart of Cusk's book, her exquisite lightness of touch and her glinting wit.” —Stephanie Cross, Daily Mail

“A brilliant, perceptive novel, Outline was serialised in its entirety by the Paris Review, which is probably a lot cooler than making the Man Booker shortlist.” —Paddy Kehoe, RTÉ

“Outline is an expertly crafted portrait that asks readers to look deeply into the text for discovery. Those who accept that challenge will be rewarded for the effort.” —Booklist (Starred review)

“This brilliant novel from Cusk . . . shuns fictional convention and frills in favor of a solid structure around a seris of dialogues . . . These 10 remarkable conversations, told with immense control, focus a sharp eye on how we discuss family and our lives.” —Publishers Weekly (Starred review)

“Cool but compelling, narrow in focus perhaps, but deep in thought.” —Lesley McDowell, The Scotsman

“An utterly engaging examination of human relationships . . . a compelling read that never once flags.” —The Crack

“Described as a 'novel in ten conversations' . . . it turns out to be a clever, fresh device that dispenses with the need for much of a plot and presents instead more of a lush human collage . . . a rich, thoughtful read.” —Carol Midgley, The Times

“This book about love, loss, memory, and the lies we tell ourselves and others exudes a contemplative, melancholy atmosphere tempered by Britsh author Cusk's wonderfully astute observations of people and the visual impressions created by her exquisitely strucutred sentences.” —Sally Bissell, Library Journal

“Outline is a quiet, profound book about the problems of living with a sense of purpose.” —Johanna Thomas-Corr, Metro

“A tapestry of different voices, its shape emerging as if by happy accident . . . [Outline] is a clever thought experiment that's far too readable ever to feel like one.” —Lidija Haas, The Independent on Sunday

“Cusk returns to fiction and top form in a novel about the stories we tell ourselves and others . . . rich in human variety and unsentimental empathy.” —Kirkus

“Like the Higgs boson, which appears only when bombarded by electrons, Rachel Cusk's nearly nameless narrator flickers into visibility only through her encounters with a series of amazingly eloquent and fascinating interlocutors. Writing at the highest level and with the greatest technical restraint, Cusk manages to describe the painful realities of women's lives by a process of erasure that is itself responsible for that suffering. This is a novel where form and content meld so perfectly as to collapse into each other. I am so much the better for having read it. As if someone finally told me the truth by telling me everything, and nothing.” —Jeffrey Eugenides, author of The Marriage Plot

“On a flight to Greece where she is going to be teaching a creative writing class, the narrator begins talking to her neighbour. More accurately, initiating a pattern that will be repeated throughout the encounters and ‘conversations' that make up this hypnotic, funny and unsettling novel, he talks at her. Gradually her own identity emerges in response to--is given shape by--what is said to her. As one of her students puts it, the story constitutes a series of events she finds herself involved in, but on which she seems to have ‘absolutely no influence at all.' The irony, of course, is that all of these tales--the author's tale--hold our attention because of Cusk's unerring command of pace and tone.” —Geoff Dyer

“Outline, in outline, tells the story of a British novelist newly arrived in Athens, who has been enlisted to teach a weeklong writing seminar. Upon this provocatively slight premise, Cusk has constructed a restrained, incisive narrative of high stylistic polish and stealthy emotional power. Formally inventive, astringently intellectual, and linguistically assured, Outline poses the question of where stories come from; it shows, with glittering clarity, why they matter.” —Rebecca Mead, author of My Life in Middlemarch

“I opened this book, and read a page, and then a few more pages, and I finished Outline before a day and a half had passed, and I am the slowest reader I know, and I have never felt guilty about not finishing a book. Outline is amazing. It changes the lighting on the charismatic, mad, maddening monologues so beloved in literature; here we are, on the previously invisible other side of it, seeing something brilliant and irremediably true.” —Rivka Galchen, author of American Innovations

“Rachel Cusk's Outline is full of baking light and quiet melancholy and bodies brushing past one another in the heat; it's a subtle and utterly engrossing exploration of the ways we make ourselves known to one another--in stories and anecdotes, through seductions and disputes--and yet remain opaque; how we sketch ourselves as outlines and find these outlines interrogated. Its conversations echo each other deftly, their acute insights gracefully pulling apart the seams of its carefully composed characters to show glimpses of much messier selves within: a series of searing psychic X-rays bleached by coastal light.” —Leslie Jamison, author of The Empathy Exams