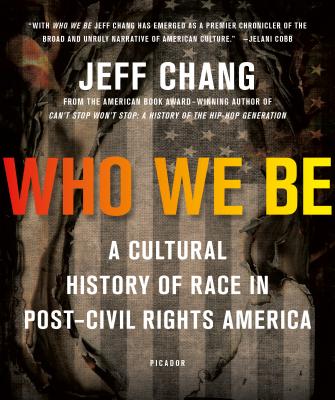 By Jeff Chang
$20.00
Email orders@greenlightbookstore.com for information about this item.

Over the past half-century, the U.S. has seen profound demographic and cultural change. But racial progress still seems distant. After the faith of the civil rights movement, the fervor of multiculturalism, and even the brief euphoria of a “post-racial” moment, we remain a nation divided. Resegregation is the norm. The culture wars flare as hot as ever. How do Americans see race now? Do we see each other any more clearly than before? In a powerful, original, and timely telling, Jeff Chang—the award-winning author of Can’t Stop Won’t Stop: A History of the Hip-Hop Generation—looks anew at the tumultuous half-century from the peak of the civil rights era to the colorization and strife of the Obama years. He uncovers a hidden history of American arts, cultural, and social movements that have changed the ways we see each other. Who We Be is at once beautiful and shocking, disquieting and hopeful, even as it urges us to reconsider the yet-unanswered question of how we might all get along.

Jeff Chang has been a hip-hop journalist for more than a decade and has written for The San Francisco Chronicle, The Village Voice, Vibe, The Nation, URB, Rap Pages, Spin, and Mother Jones. He is the author of several books, including the American Book Award-winning Can't Stop Won't Stop: A History of the Hip-Hop Generation. He was a founding editor of Colorlines Magazine, senior editor at Russell Simmons’s 360hiphop.com, and cofounder of the influential hip-hip label SoleSides, now Quannum Projects. He lives in California.

“Who We Be confirms the singular brilliance of Jeff Chang...Here is the story of us, from the bottom up, the top down, and side-to-side - an astoundingly astute collage of forgotten battles brought to light and watershed events made new by Chang's analysis. Who We Be is essential reading - not this season or this year, but until the audacity of post-racism kicks in. Which won't be happening anytime soon.” —Adam Mansbach, #1 New York Times bestselling author of Rage is Back and Go the F*ck to Sleep

“With Who We Be Jeff Chang has emerged as a premier chronicler of the broad and unruly narrative of American culture. His characteristically deft prose, broad perspective and incisive observations make this is an essential chronicle of the past three decades of American cultural history. Who We Be is a brilliant brief on who we've been all along.” —Jelani Cobb, author of The Substance of Hope: Barack Obama and the Paradox of Progress; Director of the Institute for African American Studies at the University of Connecticut

“Jeff Chang writes with necessary fire about the things that matter. Who We Be is a compassionate, clear-eyed book, an exciting contribution to the history of our present moment. I know of no better account of the glories and sorrows of contemporary American diversity, nor any so attuned to the outsized role that art has played in that journey.” —Teju Cole, author of Open City

“In 2005, Jeff Chang wrote the Hip Hop book none of us saw coming, but all of us wished we'd written. Many of us spent a decade trying to catch up. Who We Be smashes assumptions of postracialism and multiculturalism into hundreds of prickly pieces...(It) cradles the personal, communal, institutional and structural while ultimately showing us how to rebuild each with a bit more honesty and integrity. This is the book we've been waiting for.” —Kiese Laymon, author of Long Division and How to Slowly Kill Yourself and Others in America

“A new book by Jeff Chang is always a cause for celebration. His voice is unique, and his issues are our issues: this changing America, this complicated, polyglot future that some are already living in, while some are fighting to tear apart. Who We Be is an important, timely book, and it's also a terrific read.” —Daniel Alarcón, author of At Night We Walk in Circles