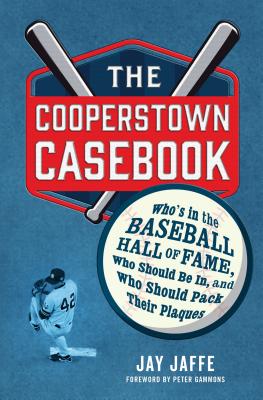 A revolutionary method for electing players to the Baseball Hall of Fame from Sports Illustrated writer Jay Jaffe, using his popular and proprietary “JAWS” ranking system.

The National Baseball Hall of Fame and Museum, tucked away in upstate New York in a small town called Cooperstown, is far from any major media market or big league stadium. Yet no sports hall of fame’s membership is so hallowed, nor its qualifications so debated, nor its voting process so dissected.

Since its founding in 1936, the Hall of Fame’s standards for election have been nebulous, and its selection processes arcane, resulting in confusion among voters, not to mention mistakes in who has been recognized and who has been bypassed. Numerous so-called “greats” have been inducted despite having not been so great, while popular but controversial players such as all-time home run leader Barry Bonds and all-time hits leader Pete Rose are on the outside looking in.

Now, in The Cooperstown Casebook, Jay Jaffe shows us how to use his revolutionary ranking system to ensure the right players are recognized. The foundation of Jaffe’s approach is his JAWS system, an acronym for the Jaffe WAR Score, which he developed over a decade ago. Through JAWS, each candidate can be objectively compared on the basis of career and peak value to the players at his position who are already in the Hall of Fame. Because of its utility, JAWS has gained an increasing amount of exposure in recent years.

Through his analysis, Jaffe shows why the Hall of Fame still matters and how it can remain relevant in the 21st century.

JAY JAFFE is a contributing baseball writer for SI.com. He is the founder of the Futility Infielder website, one of the oldest baseball blogs, and from 2005-2012 was a columnist for Baseball Prospectus. He has been a recurring guest on MLB Network’s MLB Now and Clubhouse Confidential shows and a member of the Baseball Writers Association of America since 2011. He lives in Brooklyn. The Cooperstown Casebook is his first book.

"With The Cooperstown Casebook, Jay Jaffe has given us the definitive guide to the greatest players in baseball history, and the Hall of Fame. Smart and a lot of fun, this book reads like some of Bill James's finest work, which is the highest compliment a seamhead who grew up on Bill James can offer." —Jonah Keri, bestselling author of The Extra 2% and Up, Up, & Away

"Jay Jaffe has revolutionized how we think about not just the Hall of Fame, but about baseball itself. This book taught me much about the Hall of Fame, but it taught me even more about baseball. I am smarter for having read it, and, even better, it's a blast to read." —Will Leitch, author of Are We Winning? and God Save the Fan, senior writer for Sports On Earth, and founder of Deadspin

"For those who like to wade into the statistical weeds of baseball – to analyze player performance using today’s advanced metrics – The Cooperstown Casebook delivers." —The Christian Science Monitor