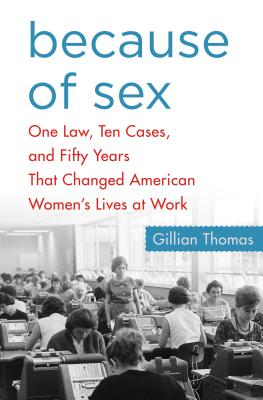 By Gillian Thomas
$26.99
Email orders@greenlightbookstore.com for information about this item.

“Meticulously researched and rewarding to read…Thomas is a gifted storyteller.” —The New York Times Book Review

Best known as a monumental achievement of the civil rights movement, the 1964 Civil Rights Act also revolutionized the lives of America’s working women. Title VII of the law made it illegal to discriminate “because of sex.” But that simple phrase didn’t mean much until ordinary women began using the law to get justice on the job—and some took their fights all the way to the Supreme Court. Among them were Ida Phillips, denied an assembly line job because she had a preschool-age child; Kim Rawlinson, who fought to become a prison guard—a “man’s job”; Mechelle Vinson, who brought a lawsuit for sexual abuse before “sexual harassment” even had a name; Ann Hopkins, denied partnership at a Big Eight accounting firm because the men in charge thought she needed "a course at charm school”; and most recently, Peggy Young, UPS truck driver, forced to take an unpaid leave while pregnant because she asked for a temporary reprieve from heavy lifting.

These unsung heroines’ victories, and those of the other women profiled in Gillian Thomas' Because of Sex, dismantled a “Mad Men” world where women could only hope to play supporting roles; where sexual harassment was “just the way things are”; and where pregnancy meant getting a pink slip.

Through first-person accounts and vivid narrative, Because of Sex tells the story of how one law, our highest court, and a few tenacious women changed the American workplace forever.

GILLIAN THOMAS is a Senior Staff Attorney with the American Civil Liberties Union’s (ACLU) Women’s Rights Project. She previously litigated sex discrimination cases at the U.S. Equal Employment Opportunity Commission and Legal Momentum (formerly NOW Legal Defense and Education Fund). Her work has appeared in The New York Times, The Los Angeles Times, The Atlantic, and Slate, and she has been interviewed by NPR and The Wall Street Journal, among others. She lives in Brooklyn and is the author of Because of Sex.

"Compulsively readable … a moving and informative account of a struggle for equality that remains incomplete." —Publisher's Weekly

"Gives well-earned attention to women who remained unknown even as the causes they fought for gained support and the legal actions they brought entered the casebooks under their names." —Linda Greenhouse, The New York Review of Books

"One of the brilliant aspects of this book is how it intertwines political history with developments in the law. In the end, this book is about the sacrifices women have made for women. It is about all of us and the commitment we will make to ensure dignity, respect, and equal rights for the average women who make this country great." —Laurie Levenson, LA Review of Books

"[Thomas's] book overflows with “I can’t believe he really said that” stories and “head-shaking” moments—stories that would be unbelievable if they weren’t true... But the book is also full of strong women and their attorneys who fought back—and won." —Ms. Blog, "Telling Her Story," March 2016

"'Giving faces to the names of women who brought these cases,' says one reader, 'makes this book remarkable beyond the important historical perspective it offers.'" —Elle

"Thomas writes with precision and grace (and a lovely lack of jargon) about 10 cases that established the full reach and scope of Title VII. The plaintiffs and attorneys she profiles here — some of whose courage and determination render them truly heroic — helped build the precedents that enable women to seek formerly male-only jobs, to work through marriage and parenthood, to be free from sexual harassment." —The Boston Globe

"A riveting read, particularly for fans of Gail Collins's When Everything Changed." —Starred, Library Journal

"Eye-opening ...Although the author's well-delineated examples will ring outrageous to modern-day ears, she reminds us how much there is still to be achieved. " —Kirkus Reviews

"Thomas grips her reader from the start.. [she] writes with a narrative style that makes reading legal cases accessible and enjoyable." —Girl with Pen, thesocietypages.org

"Elegantly written and vividly described, Gillian Thomas’s Because of Sex tells the fascinating story of the transformation of the American workforce. . It is a must read for anyone—man or woman—who puts on a uniform, or a suit, and goes to work every day." —Clara Bingham co-author, Class Action: The Landmark Case that Changed Sexual Harassment Law

"In these gripping stories of the unsung women who helped lead the legal fight for gender equality, Gillian Thomas elegantly proves Justice Holmes’s maxim, 'The life of the law has not been logic; it has been experience,' and she shows in vivid, painful detail how the brave battles of these plaintiffs made real life better for millions of their fellow Americans, women and men alike – if, sadly, not always for themselves." —Todd S. Purdum, author of An Idea Whose Time Has Come: Two Presidents, Two Parties and the Battle for the Civil Rights Act of 1964

"Because of Sex is the definitive and up to the minute account of one of—if not the—most important achievements of the feminist revolution: legal equality in the workplace. Not only does Thomas tell this invaluable story, she brings the wronged women, their lawyers, and even the bad actors on the other side to life in the most engaging way. The reader comes to care for these largely unsung heroines deeply and to learn a lot of law along the way. Brava!" —Linda Hirshman, author of Sisters in Law: How Sandra Day O'Connor and Ruth Bader Ginsburg Went to the Supreme Court and Changed the World

“A singularly important look into the relationship between women, the workplace, and the law. Gillian Thomas close-reads ten seminal cases. It's almost impossible to believe that this legal architecture didn't exist until so recently, or that women managed to work at all without it. This is a compelling, readable narrative about a law that changed everything, and the people who worked to spearhead a revolution.” —Dahlia Lithwick, Slate