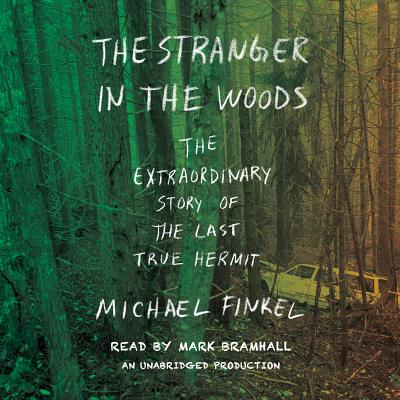 By Michael Finkel, Mark Bramhall (Read by)
Click on "Ask A Bookseller" to contact us via email for more information about this title.
Not In Store / May Not Be Available To Order (email orders@greenlightbookstore.com for details)

“This is the fascinating true story of Christopher Knight, who lived in the Maine woods for 27 years and survived by stealing supplies from vacation cabins while living in extreme conditions to avoid detection. After more than 1,000 burglaries, he was finally caught and partially reintegrated into society. His story is told together with the history of hermits and those who have sought solitude in order to have insight. Chris defies psychological profiling, and it's amazing Finkel was even able to interview him to write this book. This level of solitude would drive most people insane, but for Chris, it seems like an almost pure contemplative state. An excellent read.”
— Todd Miller, Arcadia Books, Spring Green, WI

“At 20 years old, Chris Knight drove into the Maine woods as far as his gas tank would take him, got out, threw his keys on the center console, walked into the forest, and lived in solitude for the next 27 years. While the story is largely the reader’s voyeuristic look at how he survived, this book is really an interesting commentary on introversion at its most extreme and its effects on an individual, a family, and society. It’s a fascinating read with references from history, philosophy, and psychology that don’t bog down the intensity of the story, which reads like a novel.”
— Jessica Perez , University Book Store (Mill Creek), Mill Creek, WA

Many people dream of escaping modern life, but most will never act on it. This is the remarkable true story of a man who lived alone in the woods of Maine for 27 years, making this dream a reality—not out of anger at the world, but simply because he preferred to live on his own.

In 1986, a shy and intelligent twenty-year-old named Christopher Knight left his home in Massachusetts, drove to Maine, and disappeared into the forest. He would not have a conversation with another human being until nearly three decades later, when he was arrested for stealing food. Living in a tent even through brutal winters, he had survived by his wits and courage, developing ingenious ways to store edibles and water, and to avoid freezing to death. He broke into nearby cottages for food, clothing, reading material, and other provisions, taking only what he needed but terrifying a community never able to solve the mysterious burglaries. Based on extensive interviews with Knight himself, this is a vividly detailed account of his secluded life—why did he leave? what did he learn?—as well as the challenges he has faced since returning to the world. It is a gripping story of survival that asks fundamental questions about solitude, community, and what makes a good life, and a deeply moving portrait of a man who was determined to live his own way, and succeeded.

MICHAEL FINKEL is the author of True Story: Murder, Memoir, Mea Culpa, which was adapted into a 2015 major motion picture. He has written for National Geographic, GQ, Rolling Stone, Esquire, Vanity Fair, The Atlantic, and The New York Times Magazine. He lives in western Montana.

"A story that takes the two primary human relationships—to nature and to one another—and deftly upends our assumptions about both. This was a breathtaking book to read and many weeks later I am still thinking about the implications for our society and—by extension—for my own life."
—Sebastian Junger

"An absorbing exploration of solitude and man’s eroding relationship with the natural world. Though the ‘stranger’ in the title is Knight, one closes the book with the sense that Knight, like all seers, is the only sane person in a world gone insane—that modern civilization has made us strangers to ourselves."
—Nathaniel Rich, The Atlantic

"Campfire-friendly and thermos-ready, easily drained in one warm, rummy slug… Raises a variety of profound questions—about the role of solitude, about the value of suffering, about the diversity of human needs."
—Jennifer Senior, The New York Times

"Michael Finkel has done something magical with this profound book… [His] investigation runs deep, summoning…the human history of our own attempts to find meaning in a noisy world."
—Michael Paterniti

"Chris Knight is an American original... I burned through this haunting tale in one rapt sitting."
—John Vaillant