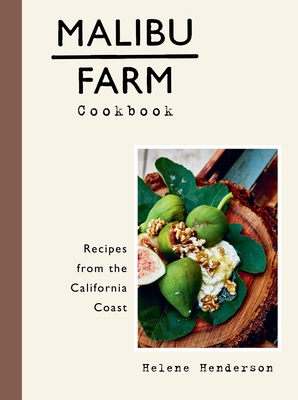 From the beloved restaurant, a cookbook featuring more than 100 recipes that celebrates fresh produce, meals for sharing, and the beauty of coastal California.

Situated at the end of the pier, Malibu Farm is beloved for its spectacular Pacific Ocean views, the freshly sourced ingredients on its ever-changing menu, and its warm vibe. Chef-owner Helene Henderson opened the space after the once-intimate dinners she hosted on the grounds of her home grew too large.

Now, in Malibu Farm Cookbook, she invites you honor the shoreline and mountains of Southern California with dishes like Ricotta and Pea Frittata, Butterfly Beef Tenderloin with Horseradish, Seared Fava Beans, and Grilled Chocolate Cake with Caramel Sauce. Helene captures the spirit of her own farm with recipes using the morning’s fresh eggs, the catch of the day, the luscious vegetables that grow all around, honey harvested steps from where it’s enjoyed, and olive oil straight from her grove. Punctuated with luscious, vibrant photography, Malibu Farm Cookbook is a stunning sensory experience that transports you right to the edge of the Pacific.

Helene Henderson is an African-American, Swedish-born chef; that is where she learned to cook. In 1997, she started Lavender Farms Catering in LA, specializing in organic food. Malibu Farm began in her backyard with cooking classes and catered farm dinners. Now, she is the chef-owner of Malibu Farm Pier Cafe and Restaurant, which use her own produce and that of other local farmers. She lives there with her husband, screenwriter and director John Stockwell, and their three children.

"Fresh, simple, delicious: At Malibu Farm in sunny SoCal, these are words to cook by. The surfer-cool cafe's first recipe collection lets you channel that effortless vibe at home. From pea-and-pesto couscous to branzino with salsa verde, the docus is on quality ingredients and a less-is-more approach." –Self

“A staple in every Angeleno’s kitchen.” –Angeleno Magazine

“One of LA’s best hangouts.” –Food and Wine

“Perched even farther out over the pacific at the end of the pier—past the fishermen and the dolphin watchers—is Malibu Farm, an unself-consciously stylish bohemian café that serves simple, delicious, impeccably sourced dishes.” –Conde Nast Traveler

“Helene Henderson has turned a beach tourist trap into a budding empire under the sun.” –Los Angeles Magazine