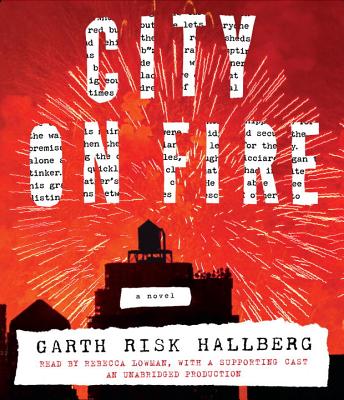 By Garth Risk Hallberg, Rebecca Lowman (Read by), Tristan Morris (Read by)
Click on "Ask A Bookseller" to contact us via email for more information about this title.
Not In Store / May Not Be Available To Order (email orders@greenlightbookstore.com for details)

“Big, juicy, and full-throated, City on Fire absorbs readers into an expertly crafted 1970s New York City and introduces them to character after lushly drawn character: the charismatic young woman with a hidden life, her asthmatic punk groupie friend, the wizened reporter, the obscenely rich and rebellious, the not-so-rebellious, and those who love them. Their lives create a rich tapestry, beginning with a murder on the brink of the New Year in 1977 and culminating later that year during the infamous blackout. With unequivocal skill, Hallberg makes readers feel like they are holding the whole city in their hands. Breathe deep and enjoy the experience!”
— Melinda Powers (E), Bookshop Santa Cruz, Santa Cruz, CA

A big-hearted, boundary-vaulting novel that heralds a remarkable new talent: set in 1970s New York, a story outsized in its generosity, warmth, and ambition, its deep feeling for its characters, its exuberant imagination. The individuals who live within this extraordinary first novel are: Regan and William Hamilton-Sweeney, estranged heirs to one of the city's largest fortunes; Keith and Mercer, the men who, for better or worse, love them; Charlie and Samantha, two suburban teenagers seduced by downtown's punk scene; an obsessive magazine reporter and his idealistic neighbor; and the detective trying to figure out what any of them have to do with a shooting in Central Park. Their entangled relationships open up the loneliest-seeming corners of the crowded city. And when the infamous blackout of July 13, 1977, plunges this world into darkness, each of these lives will be changed forever. A novel about love and betrayal and forgiveness, about art and truth and rock 'n' roll, about how the people closest to us are sometimes the hardest to reach--about what it means to be human. Read by Rebecca Lowman with Macleod Andrews, Alex McKenna, Paul Michael, Tristan Morris, and Bronson Pinchot.

GARTH RISK HALLBERG lives in New York with his wife and children. This is his first novel.