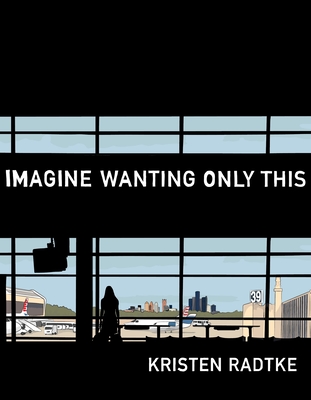 ONE OF THE BEST BOOKS OF THE YEAR: Forbes • Lit Hub • Electric Lit

A gorgeous graphic memoir about loss, love, and confronting grief

When Kristen Radtke was in college, the sudden death of a beloved uncle and the sight of an abandoned mining town after his funeral marked the beginning moments of a lifelong fascination with ruins and with people and places left behind. Over time, this fascination deepened until it triggered a journey around the world in search of ruined places. Now, in this genre-smashing graphic memoir, she leads us through deserted cities in the American Midwest, an Icelandic town buried in volcanic ash, islands in the Philippines, New York City, and the delicate passageways of the human heart. Along the way, we learn about her family and a rare genetic heart disease that has been passed down through generations, and revisit tragic events in America’s past.

A narrative that is at once narrative and factual, historical and personal, Radtke’s stunning illustrations and piercing text never shy away from the big questions: Why are we here, and what will we leave behind?

(With black-and-white illustrations throughout; part of the Pantheon Graphic Novel series)

KRISTEN RADTKE is the managing editor of Sarabande Books and the film and video editor of TriQuarterly magazine. She lives in New York.

"This delicate, multi-layered mediation on memory, loss and the allure of abandoned spaces is an astonishingly sure-footed first work.... Radtke’s clear and earnest linework adds a dimension that elevates it above the standard 'young person’s memoir' genre, while bringing the narrative strengths of contemporary literary non-fiction to the graphic novel format." —Forbes

“Radtke is, first and foremost, a superhuman of illustration, a grandmaster like Adrian Tomine or Chris Ware. . . . Close-ups of hands and faces alternate with expansive landscapes painted in delicate shades of gray, a ray from a flashlight pierces the night, birds swoop up into the sky in silhouette, a ceiling fan morphs into an airplane in the eyes of an insomniac. Not a line is out of place in these drawings, as they depict contemporary reality with uncanny precision. . . . As Radtke attempts to engage with an immense idea that is beyond most people’s grasp—how to live when all things come to an end?—what ultimately emerges is a portrait of a powerful mind grappling with alienation and loneliness.” —Anya Ulinich, The New York Times Book Review

"With elegant writing and arresting drawings, Kristen Radtke’s Imagine Wanting Only This . . . grapple[s] with the limits of how much understanding our past can help us comprehend our present. . . . Radtke balances the personal—insomnia, failed love, her own heart ills, and loss—with larger historical forces and events. Her atmospheric black and white drawings shift between close-ups of telling details—a pile of mail on the floor, a single hanging bulb in a garage—and powerful full-page illustrations. She is a master of silhouette and shadow, of negative space, evoking a sense of potent isolation." —Nina MacLaughlin, The Boston Globe

“One of the most haunting graphic memoirs I’ve ever read. . . . As we turn the pages on [Radtke’s] journey, we are ravaged and ravished. There is a proud tradition of graphic memoirists—of those dually equipped to wield word and image—to tell the true and deeply considered story of a life. Alison Bechdel, Roz Chast, Riad Sattouf, David Small, Marjane Satrapi, Art Spiegelman and others have done it searingly well. Add now to that list Radtke, who proves herself an equal among equals with this debut book. . . . Radtke's imagination can't help itself. Her final pages are unapologetic; they are forecasts. They force the reader to confront the world as the world might soon be. Did you really just do that, Kristen Radtke? I said the words out loud, the first time I finished reading Imagine Wanting Only This. Are you allowed? To disarm us, to charm us, to goad us, to frighten us, to end this book the way you do? But I have just read this book again, and indeed Radtke pulls no punches; her work is as wonderful and heartbreaking the second time through. I'm still scooped out, but I'm still deeply grateful for the towering power of Radtke's vision.” —Beth Kephart, Chicago Tribune

“Remarkable. . . . a breathtaking mix of prose and illustration.” —The Atlantic

“A miracle and a masterpiece.” —Electric Literature

“Brilliant. . . . The book is a family drama, youthful romance, obsessive adventure, and karmic inquiry wrapped in a coming-of-age tale. It's [Radtke's] thumbnail history of left-behind people and places, and a wondrous panel-by-panel archive of the interplay between her rapacious intellect and her expansive imagination. . . . In places, the commingled pictorial and written narrative flows like a film, like a dreamscape, like the river of time itself. It's Radtke's quietly erudite, observant language . . . that grounds her intricate and dramatic drawings. But maps, photographs, medical charts, newspaper clippings, and a free-floating Sharpie embedded in the almost 300-page book enhance the storytelling as they surprise and delight.” —Elle

“In her exquisitely soul-, mind-, and heart-shattering debut graphic memoir, Kristen Radtke explores life's big questions surrounding grief, mortality, and the impermanence of the things—and the people—we love most. . . . That Radtke can treat such timeless and oft-explored topics as death and loss without a touch of cliché is impressive enough, but that she does it with an extraordinary sensitivity and intelligence uniquely her own makes this work a stunning reminder of the power of art to make us feel hopeful as we confront existential terror—to greet the abyss with eyes clear and open.” —Nylon

“The most beautiful graphic novel you’ll read all year, Kristen Radtke’s memoir is an absolutely stunning look at what it is to recover from grief, and is so haunting you’ll be thinking about it for days after reading it. . . . At once narrative and factual, historical and personal, Radtke's stunning illustrations and piercing text never shy away from the big questions: Why are we here, and what will we leave behind?” —Newsweek (Best of the Week)

“The transient beauty and piercing sadness of the ruins is gorgeously portrayed through the combination of word and illustration; graphic memoir feels like the necessary medium for this story. . . . Radtke's life—and the way she beautifully elevates her deeply personal experiences into universal lessons—makes for brilliant, compelling, unforgettable art.” —Bustle

“An unforgettable exploration of the people, and places, we leave behind, as well as a dreamy, well-drawn memoir about the landscapes of loss.” —Refinery29 (Favorite Books of 2017)

“One of the most striking and interesting comics of the year.” —Comic Books Review

“Radtke’s literary debut deserves to sit alongside other popular contemporary memoirs like H is for Hawk, The Faraway Nearby, and The Empathy Exams. Her compelling visual transmedia storytelling creates intimacy and narrative through the relationship between text and image, which she uses to depict vast emotions, symbolism, thematic impulses, and flashbacks.” —The Rumpus

“Kristen Radtke’s graphic memoir is a story of loss, but the Brooklyn-based illustrator’s approach is adventure. . . . In an impressive spread of portfolio work, Radtke’s illustrations tend toward raw vector-drawn portraiture, and sparse samples of her written skill mirror the style with clever, candid observations on their subjects.” —The National Post

“Loss echoes throughout its illustrated pages, threading disparate corners of the globe together into a touching narrative." —Huffington Post

“[Radtke is] a master of both prose narrative and visual art. . . . Powerfully illustrated and incisively written—a subtle dazzler of a debut.” —Kirkus (Starred Review)

“Radtke’s neat, grayscale drawings are detailed and coloring-book precise, and her thoughtful, meticulous narration makes true visual essays of them. . . . In her cerebral journey of a first book, Radtke . . . asks and answers: Why do ruins fascinate, and why is this fascination considered perverse? Why are ruins there at all?” —Booklist (Starred Review)

"Beautifully written, this multidirectional memoir ties threads and minutiae from Radtke’s personal and family history and history writ large to create a tender, drifting reflection on the calamity life is often built on, the nothing it will become, and the breathtaking beauty of lingering between those forgone conclusion. . . . A fantastic example of the graphic novel’s possibilities as a literary medium. . . . Lyrically beautiful, and unquestionably brave." —Library Journal (Starred Review)

"Radtke unspools a ruminative narrative about searching for meaning in an impermanent world. . . . delivered with an unusually forthright honesty and deft, Chris Marker-esque ability to parse out meaning and wonder from the smallest details. . . . Unique and thuddingly real." —Publishers Weekly

“Cities, ambitions, romances, and bodies come to ruin before our eyes, as Kristen Radtke invites us, in her beautifully understated way, to be disturbed, fascinated, and yes, even attracted to that ruin. A remarkable bildungsroman!” —Eula Biss, author of On Immunity

“Kristen Radtke leads us through a bleak and beautifully crafted story of heart and heartbreak—creation, connection, decay, and loss. Imagine Wanting Only This is challenging and inspiring.” —Ellen Forney, New York Times bestselling author of Marbles

“Kristen Radtke’s Imagine Wanting Only This doesn’t tell a single story but a chorus of histories, personal and familial and historical, and invents its own marvelous language for their telling—a language forged from interior thought and visual imagination, bringing together words and illustration in continually surprising and moving ways. The voice in these pages is eloquent in so many ways at once, like a shape that exists in three dimensions rather than two, and it’s utterly singular: visually alive, attentive to details, self-questioning and tender as it surveys variously haunted terrains of heart and landscape. Radtke’s world is so immersive, and so sensitively conjured, that once I entered the sketched chamber of her pages, I didn’t want to leave again—or even pause for breath—until I reached the end.”  —Leslie Jamison, author of The Empathy Exams