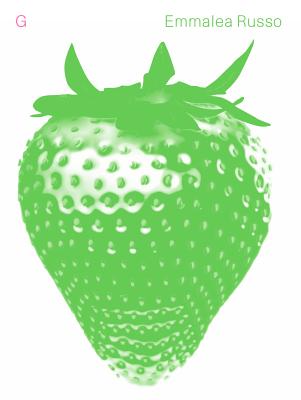 Poetry. Art. "'G is a garden and seems simple, ' we're told early on in this disarming, charming, and alarming book. With its text cleaved in two across right and left pages, G reads like an exchange between garden plots and the gardener's journal--neither of which remains simple or simply wholesome from up close, when you're in the weeds. It's this up-closeness that rewards, transforming an air of levity into an air of suspension, or suspense: who or what is this G, really? (Who or what, finally, isn't?) Russo's writing, a peculiar marriage of compression and splay, embeds a germinal weirdness in the fallow page, and waits. The results are like certain mushrooms fruiting, unassuming to look at but potent with magic: 'a hindrance open.'"--Anna Moschovakis "Emmalea Russo is imprinting a new archetype of mystical female poet into the collective, where we can grow of the edges & be made of the Glitches and celebrate the poetic as a means of creative prayer."--Guru Jagat "Follow it wherever it leads and let go of expectation about what a poem is. It's a scary gift with a complex and intricate structure."--Jen Bervin "It is tempting to call G a meditation on perception, but it's always-already clear-eyed: often, when the figure meets ground, the actual ground is already the figure, and Emmalea Russo understands these illusory but changeable optics (and her chosen medium) as much as her writing has lived and centered them--grounded, yes, by (tenderly) performed intimacy, tide, earth. G, a letter, lest we forget, too falls from geological time; and the poet's linguistic figuring, seeing, breaking, and tending speak less to the reader than they do water her (during ambrosial hours, so that we do not burn). The work recalls, for me, Carla Harryman, Renee Gladman, Peter Greenaway's reflective H is for House; but Russo's responses to how 21st-cen. life interrupts and materializes fenestration ( ) act as shelves in multiple Gs--where one might sit as if on a lover's lap--and so become truly themselves: 'Some things drop down into what space is cleared for.'"--Corina Copp.