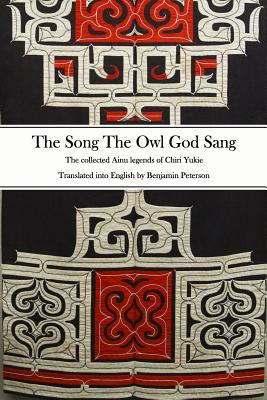 Among the vanishing cultures of the world, the Ainu of north-east Asia stand out for the startling richness of their oral literature.

These thirteen beautiful Ainu chants were collected by Chiri Yukie in 1922 -- the first Ainu literature to be written down by an Ainu. This book presents new English translations of Chiri's remarkable work.

Originally written in yukar form, a type of chant used by female storytellers among the Ainu villages of Hokkaido, these stories tell of the relationship between mankind and the world of spirits. Each yukar is narrated by a spirit -- fox, whale, frog, or even shellfish. Most important is the owl god, Kotankor Kamui, whose two long songs describe the covenant between humans and the spirits who provide them with food. Other tales focus on the balance of nature, on the respect due between animal spirits and people, and on the strength of Okikirmui, the human hero.

The Ainu oral tradition was in danger of dying in the early 20th century, when the teenaged Chiri Yukie resolved to begin writing down these chants. Descended from a line of female storytellers, she devised a way of representing Ainu language in the Roman alphabet, and made Japanese translations of the most important tales.

Although she died at 19, the thirteen tales she had written down went on to become a sensation. Her clear and beautiful yet intricate and emotive Japanese translations brought Ainu culture to a wide audience in Japan and created a movement to record and preserve Ainu belief in a living state. In many ways, the idea of trying to learn from and preserve tribal wisdom goes back to Chiri's book.

Chiri's work includes the best-known passages of Ainu literature: Chiri's original introduction, an elegy to the vanishing Ainu way of life, and the tale 'Silver drops fall around, golden drops fall around'.

This translation tries to preserve the rich texture of Chiri's versions in English, while remaining absolutely true to the details of the original. A clear introduction to Chiri, her book, and its language is provided, giving the reader a vivid insight into this startlingly sophisticated spiritual tradition.