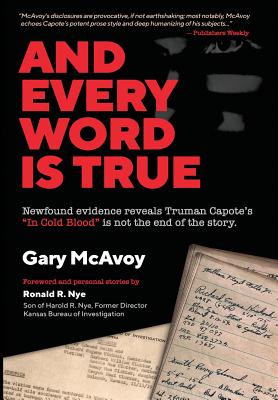 Truman Capote's bestselling book "In Cold Blood" has captivated worldwide audiences for over fifty years. It is a gripping story about the consequences of a trivial robbery gone terribly wrong in a remote village of western Kansas.

But what if robbery was not the motive at all, but something more sinister? And why would the Kansas Bureau of Investigation press the Attorney General to launch a ruthless four-year legal battle to prevent fresh details of the State's most famous crime from being made public, so many years after the case had been solved?

Based on stunning new details discovered in the personal journals and archives of former KBI Director Harold Nye--and corroborated by letters written by Richard Hickock, one of the killers on Death Row--"And Every Word Is True" meticulously lays out a vivid and startling new view of the investigation, one that will keep readers on the edge of their seats as they pick up where Capote left off. Even readers new to the story will find themselves drawn into a spellbinding forensic investigation that reads like a thriller, adding new perspectives to the classic tale of an iconic American crime.

Sixty years after news of the 1959 Clutter murders took the world stage, "And Every Word Is True" pulls back the curtain for a suspenseful encore to the true story of "In Cold Blood."