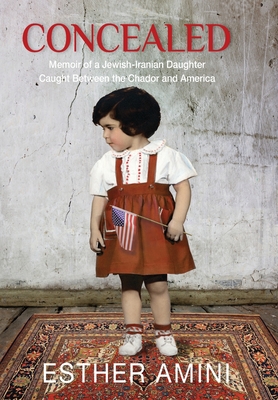 Esther Amini grew up in Queens, New York, during the freewheeling 1960s. She also grew up in a Persian-Jewish household, the American-born daughter of parents who had fled Mashhad, Iran. In Concealed, she tells the story of being caught between these two worlds: the dutiful daughter of tradition-bound parents who hungers for more self-determination than tradition allows.

Exploring the roots of her father's deep silences and explosive temper, her mother's flamboyance and flights from home, and her own sense of indebtedness to her Iranian-born brothers, Amini uncovers the story of her parents' early years in Mashhad, Iran's holiest Muslim city; the little-known history of Mashhad's underground Jews; the incident that steeled her mother's resolve to leave; and her parents' arduous journey to the U.S., where they faced a new threat to their traditions: the threat of freedom. Determined to protect his daughter from corruption, Amini's father prohibits talk, books, education, and pushes an early Persian marriage instead. Can she resist? Should she? Focused intently on what she stands to gain, Amini comes to see what she also stands to lose: a family and community bound by food, celebrations, sibling escapades, and unexpected acts of devotion by parents to whom she feels invisible.

In this poignant, funny, entertaining, and uplifting memoir, Amini documents with keen eye, quick wit, and warm heart how family members build, buoy, wound, and save one another across generations; how lives are shaped by the demands and burdens of loyalty and legacy; and how she rose to the challenge of deciding what to keep and what to discard.

"In this beautifully crafted memoir, Esther Amini weaves a riveting portrait of her family life as the daughter of Iranian-Jewish immigrants in New York City.... It is a deeply personal tale, painfully honest and brilliantly told."--Susan Mailer, psychoanalyst and author of In Another Place

"Concealed is a heart-wrenching...memoir by the daughter of...Iranian Jews who...never escape the emotional prison of their previous existence. You will cheer for her as you ponder the eternal question: how do we survive our families?"--Sally Koslow, author of Another Side of Paradise

"Concealed is Esther Amini's remarkable account of growing up in a house where books and education are for boys and prearranged marriage is supposed to be her destiny....Lucky for us she grew up to be a writer...who has produced a wonderful memoir." --Patty Dann, author of Mermaids

"A moving, honest and compelling memoir that unveils the little-known world of Persian-Jewish
immigrants in America.... Amini's characters leap off the page right into your heart." --Ronda Spinak, Artistic Director, Jewish Women's Theatre

Esther Amini is a writer, painter, and psychoanalytic psychotherapist in private practice. Her short stories have appeared in Elle, Lilith, Tablet, The Jewish Week, and Proximity. She was awarded Aspen Words' Emerging Writer Fellowship in 2016 based on an early draft of this memoir. Her pieces have been performed by Jewish Women's Theatre, which name her Artist-in-Residence in 2019. Esther Amini lives in New York City with her husband. Concealed is her debut memoir.