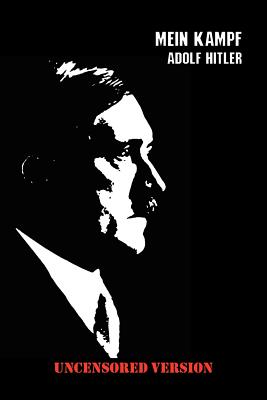 By Adolf Hitler
$29.95
Available to order (allow for shipping time to bookstore or direct-to-home)

Mein Kampf is one of the most widely known and heavily quoted books of all time. It demonstrates both Hitler's ability to persuade and his ability to instill a sense of heroic destiny. When most people hear the title, Mein Kampf, their first reaction is a growing emotional outburst that finally erupts in a yell of anti-Semitism; however anyone who has read Mein Kampf knows there is much more to the work. It is a retrospective on history, politics, and a guide to achieving power from the point of view of Adolf Hitler. It has become a dictators' manual, which has been read by all major dictators since World War II including Sadam Hussein who patterned his political movement, the Ba'ath party, after the Nazi party. It is read by corporate CEO's and politicians who seek to use the lessons for both good and bad ends. The accuracy of the political parts of Mein Kampf was proven by Hitler's successful rise to power and by the rise of those who have followed his formula. Many people think Mein Kampf is a long diatribe against Jews and other races. The truth is that only a small part of Mein Kampf is anti-Semitic. The majority of the book involves Hitler's discussion of the German people's difficult times after the First World War, his political theories and his organization of the Nazi Party, and it includes an especially large number of attacks against his enemies. Mein Kampf covers a wide-scope that offers an interesting interpretation of politics, business, people, and foreign policy matters. To characterize it as simply a racist work is to oversimplify its message. Germany did not follow Hitler because he was a racist, they followed him because he promised a great future, and Mein Kampf is where he promised that great future. This modern, easy to read, truly complete and uncensored edition of Mein Kampf has been newly released which reveals more than any past translation.