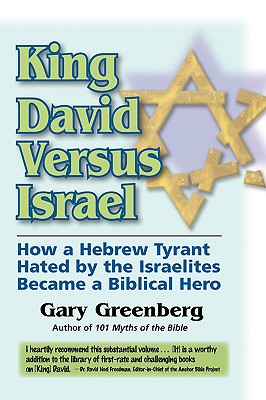 "I heartily recommend this substantial volume... It] is a worthy addition to the library of first-rate and challenging books on King] David."-Dr. David Noel Freedman, Editor-in-Chief of the Anchor Bible Project. "Placing these texts into their historical, political, and geographical setting, Greenberg is able to separate much historical fact from biblical fiction. . . A comprehensive account of King David." -Library Journal "Gary Greenberg will make you think. He might even make you angry."-Green Bay Press-Gazette "Offers compelling new evidence that changes our perceptions-turns David, in essence from a mythological figure into a living, breathing human being."-Bookloons WHAT DID THE ANCIENT ISRAELITES REALLY THINK ABOUT KING DAVID? King David has become one of the most popular and beloved heroes in the entire bible. But how was he perceived by those who knew him in the time that he became ruler over the Hebrew people? In this challenging and controversial biography Greenberg offers compelling evidence that David was widely despised among the ancient Israelites and relied on Philistine allies to keep himself in power against ongoing popular resistance from the people of Israel. SOME OF THE FASCINATING THINGS YOU WILL LEARN IN KING DAVID VERSUS ISRAEL: David did not kill Goliath. One of King David's soldiers did the deed. Incriminating evidence links David to Saul's death. David became king of Israel only after waging a two-year civil war against Saul's son, King Eshbaal. A popular military rebellion against King David temporarily removed him from the throne; a second popular rebellion threatened to do the same. Gary Greenberg is the author of several books, including 101 Myths of the Bible and The Judas Brief: Who Really Killed Jesus?. His popular and controversial writings have been translated into many languages. He is President of the Biblical Archaeology Society of New York and has served as a consultant to National Geographic Television's Science of the Bible series. He maintains a web site at www.bibleandhistory.com.