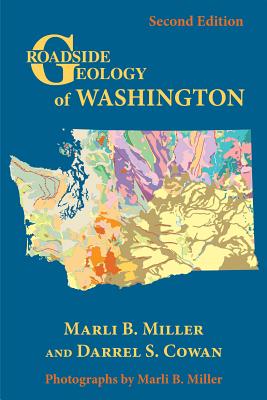 By Marli B. Miller, Darrel S. Cowan
$26.00
Not In Store / Available To Order (allow for shipping time to bookstore or direct-to-home)

Washington is alive with geologic activity: Its home to the most active volcanoes in the lower 48, earthquakes regularly rattle the populated Puget Sound region, the potential of landslides increases with each soaking rain, and tsunami evacuation routes alert tourists in Olympic National Park to the active plate boundary just off the coast. The only geologic hazard Washingtonians need not fear, at least not with the continued trend of global warming, is another Ice Age flood. More than forty of the biggest floods known in the history of Earth scoured the Channeled Scabland of eastern Washington, the most recent only about 15,000 years ago.
Since the first edition of Roadside Geology of Washington appeared on the book shelves in 1984, several generations of geologists have studied the wild assortment of rocks in the Evergreen State, from 45-million-year-old sandstone exposed in sea cliffs at Cape Flattery to 1.4-billion-year-old sandstone near Spokane. In between are the rugged granitic and metamorphic peaks of the North Cascades, the volcanic flows of Mt. Rainier and the other active volcanoes of the Cascade magmatic arc, and the 2-mile-thick flood basalts of the Columbia Basin. With the help of this brand new, completely updated second edition, you can appreciate spectacular geologic features along more than forty of Washingtons highways.