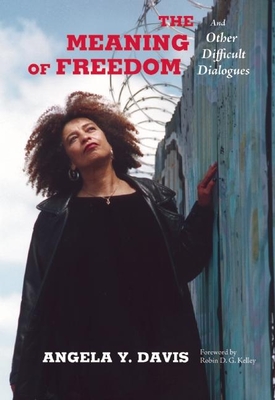 What is the meaning of freedom? Angela Y. Davis' life and work have been dedicated to examining this fundamental question and to ending all forms of oppression that deny people their political, cultural, and sexual freedom. In this collection of twelve searing, previously unpublished speeches, Davis confronts the interconnected issues of power, race, gender, class, incarceration, conservatism, and the ongoing need for social change in the United States. With her characteristic brilliance, historical insight, and penetrating analysis, Davis addresses examples of institutional injustice and explores the radical notion of freedom as a collective striving for real democracy - not something granted or guaranteed through laws, proclamations, or policies, but something that grows from a participatory social process that demands new ways of thinking and being. The speeches gathered together here are timely and timeless, writes Robin D.G. Kelley in the foreword, they embody Angela Davis' uniquely radical vision of the society we need to build, and the path to get there.

The Meaning of Freedom articulates a bold vision of the society we need to build and the path to get there. This is her only book of speeches.

Davis' arguments for justice are formidable. . . . The power of her historical insights and the sweetness of her dream cannot be denied.--The New York Times

Angela Davis deserves credit, not just for the dignity and courage with which she has lived her life, but also for raising important critiques of a for-profit penitentiary system decades before those arguments gained purchase in the mainstream. --Thomas Chatterton Williams, SFGate

Long before 'race/gender' became the obligatory injunction it is now, Angela Davis was developing an analytical framework that brought all of these factors into play. For readers who only see Angela Davis as a public icon . . . meet the real Angela Davis: perhaps the leading public intellectual of our era. --Robin D. G. Kelley author of Thelonious Monk: The Life and Times of an American Original

There was a time in America when to call a person an 'abolitionist' was the ultimate epithet. It evoked scorn in the North and outrage in the South. Yet they were the harbingers of things to come. They were on the right side of history. Prof. Angela Y. Davis stands in that proud, radical tradition. --Mumia Abu-Jamal, author of Jailhouse Lawyers: Prisoners Defending Prisoners v. the U.S.A.

Behold the heart and mind of Angela Davis, open, relentless, and on time --June Jordan

Angela Y. Davis is Professor Emerita of History of Consciousness at the University of California and author of many books including Women, Race and Class and Are Prisons Obsolete? She is a much sought after public speaker and internationally known feminist scholar, prison abolitionist, and advocate for social justice. Robin D.G. Kelley is a professor of History, American Studies and Ethnicity at USC. From 2003-2006, he was the William B. Ransford Professor of Cultural and Historical Studies at Columbia University. From 1994-2003, he was a professor of history and Africana Studies at NYU. He is the author of Thelonious Monk: The Life and Times of an American Original and Freedom Dreams: The Black Radical Imagination.

"This document of contemporary thought by a major world-historical figure, Davis' first full-length book in almost a decade, makes it timelessly clear that while no freedom fight will ever be easy'We cant rely on simple categories'every real triumph, however small and short-lived, will always be worth it." -- Todd Steven Burroughs, Ebony.com

"The 12 speeches delivered between 1994 and 2009, and collected here for the first time, provide as good an entry point as any into the radical life and ideas of the political activist and thinker Angela Davis." -- San Francisco Chronicle

"In this collection of 12 previously unpublished speeches, the longtime activist asks readers to imagine a social landscape devoid of institutional and cultural injustice. Freedom is a process of becoming, she asserts; it can't be fully realized without collective participation by a demanding society."--Ms. Magazine

"Angela Y. Davis proves that it's still possible to find a new, refreshing way to discuss race, gender, class, and sexuality. In this heartfelt examination through previously unpublished speeches, Davis discusses these issues with simple language and challenges us to think about how feminism and racism relate to our everyday lives."--Bust Magazine

"This book is a collection of Davis lectures from 1994 through 2009, interweaving themes of freedom and bias based on race, gender, and sexual orientation. Davis is at her best linking these perceptively separate segments into a broader concept of freedom across all the lines that separate us."--Booklist

"As always, Davis is particularly concerned with the prison-industrial complex, yet her thoughts on marriage equality, immigration and globalization are just as thought-provoking." -- San Jose Mercury News