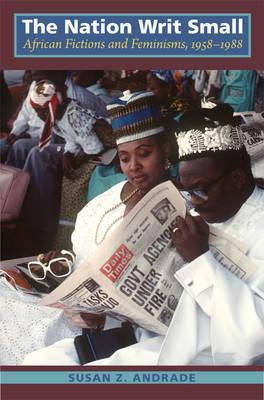 By Susan Z. Andrade
$99.95
Email orders@greenlightbookstore.com for information about this item.

In The Nation Writ Small, Susan Z. Andrade focuses on the work of Africa's first post-independence generation of novelists, explaining why male writers came to be seen as the voice of Africa's new nation-states, and why African women writers' commentary on national politics was overlooked. Since Africa's early female novelists tended to write about the family, while male authors often explicitly addressed national politics, it was assumed that the women writers were uninterested in the nation and the public sphere. Challenging that notion, Andrade argues that the female authors engaged national politics through allegory. In their work, the family stands for the nation; it is the nation writ small. Interpreting fiction by women, as well as several feminist male authors, she analyzes novels by Flora Nwapa and Buchi Emecheta (Nigeria); novellas by Ousmane Semb ne, Mariama B , and Aminata Sow Fall (Senegal); and bildungsromans by Tsitsi Dangarembga (Zimbabwe), Nuruddin Farah (Somalia), and Assia Djebar (Algeria). Andrade reveals the influence of Africa's early women novelists on later generations of female authors, and she highlights the moment when African women began to write about macropolitics explicitly rather than allegorically.

Susan Z. Andrade is Associate Professor of English at the University of Pittsburgh and the co-editor of Atlantic Cross-Currents/Transatlantiques (Africa World Press, 2001).