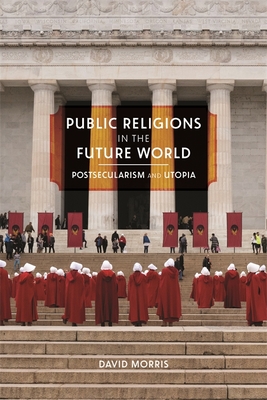 Public Religions in the Future World is the first book to map the utopian terrain of the political-religious movements of the past four decades. Examining a politically diverse set of utopian fictions, this book cuts across the usual Right/Left political divisions to show a surprising convergence: each political-religious vision imagines a revived world of care and community over and against the economization and fragmentation of neoliberalism. Understanding these religions as utopian movements in reaction to neoliberalism, Public Religions invites us to rethink the bases of religious identification and practice. Offering new insights on texts from the Left Behind series to the novels of Octavia Butler, Public Religions shows that the utopian energy of the present opens new opportunities for political organizing and genuine, lasting community building.

Public Religions in the Future World presents a literary history of the political-religious present, arguing that the power of public religion lies in the utopian visions that underlie religious beliefs. It shows that contemporary literary utopianism is deeply inflected with religious ideas, with the visions, values, and ambitions of Christianity, Islam, nature mysticism, and other traditions. Further, Public Religions demonstrates that this utopianism's religiosity is in turn politically inflected, that it resonates with and underwrites a range of competing political projects: those of imperialism, globalization, neoliberal capitalism, deep ecology, and the pro-migration movement. David Morris constructs a working theory of how religion makes large-scale interventions in political debates. The novels in his study draw on religious traditions to articulate visions, programs, or missions for achieving some version of an improved world. In doing so, they undertake the work of literary postmodernism: to represent globality, to recover the voices of the underrepresented, and to imagine a future that escapes the destructiveness of global capitalism.

DAVID MORRIS is senior lecturer in English at the University of Illinois, Urbana-Champaign, where he teaches courses in literature, film, and rhetoric. His work has appeared in Cultural Critique and Utopian Studies. He lives in Urbana, Illinois.