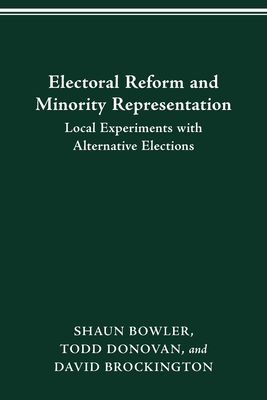 Questions of minority representation have long plagued the U.S. voting systems. The standard election often leaves political, racial, or ethnic minorities with little chance of being represented. Race-conscious districting remains the primary policy tool used for providing representation of racial and ethnic minorities in the United States—and it continues to generate tremendous conflict. Can alternatives to race-conscious, single-member districts offer benefits that extend beyond simply providing descriptive representations of minorities?

This study examines one such “semi-proportional” representation election system: Cumulative Voting (CV). For over a decade, scores of local U.S. governments have been elected by Cumulative Voting. This provides us with the ability to examine the effects of CV elections over time. Moreover, the use of CV in the United States allows us to compare politics in places that adopted CV to highly similar places that did not. Electoral Reform and Minority Representation shares evidence that CV elections can produce minority representation that matches levels generated with the drawing of race-conscious “majority-minority” districting. It also offers evidence that the quality of democratic processes in CV communities is in several ways higher that those under districts.

Given America’s growing racial and ethnic diversity, and given successful legal challenges that limit the use of race-conscious districting Electoral Reform and Minority Representation suggests that Cumulative Voting may be a better way to achieve minority representation in U.S. politics.

“A groundbreaking volume that serves as a model for empirical political scientists. By using the tools of social science to gather evidence from the real world of politics, the authors address questions fundamental to democratic society. The writing, analysis, and discussion are easily accessible, and the findings should generate considerable debate among academics, public officials, and citizens alike.” —Perspectives on Politics

“The authors argue that cumulative voting elections not only result in greater minority representation, but also provide normative benefits in the guise of more competitive campaigns and higher voter turnout than seen in a majoritarian elections. Electoral Reform and Minority Representation will prove essential reading for students of voting systems.” —Charles Barrilleaux, Florida State University