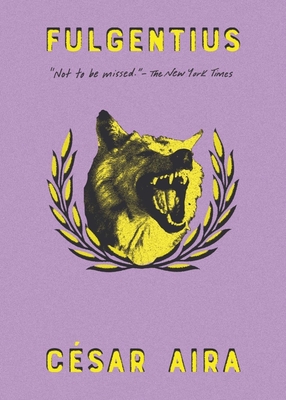 Aira holds a fun-house mirror up to the genre of historical fiction in this novel about an aging Roman general on what may be his last campaign into the provinces.

By profession I am a soldier, a general in the glorious Roman army. As a playwright, I think of myself as a sublime amateur.

In Cesar Aira’s new novel, Fulgentius, a sixty-seven-year-old imperial Roman general—“Rome’s most illustrious and experienced”—is sent to pacify the remote province of Pannonia.He is a thoughtful, introspective person, a saturnine intellectual who greatly enjoys being on the march away from his loving family, and the sometimes deadly intrigues of Rome. Fulgentius is also a playwright (though of exactly one play) and in every city he pacifies, he stages a grand production of his farcical tragedy (written at the tender age of twelve) about a man who becomes a famous general only to be murdered “at the hands of shadowy foreigners.” Curiously, what he had imagined as a child turns out to be the story of his life, almost. As the playwright-turned-general broods obsessively about his only work, the magnificent Lupine Legion—“a city in movement” of 6,000 men, an invincible corps of seasoned fighters wearing their signature wolfskin caps—kills, burns, pillages, and loots their way to victory. But what does victory mean?

CÉSAR AIRA was born in Coronel Pringles, Argentina in 1949, and has lived in Buenos Aires since 1967. He taught at the University of Buenos Aires (about Copi and Rimbaud) and at the University of Rosario (Constructivism and Mallarmé), and has translated and edited books from France, England, Italy, Brazil, Spain, Mexico, and Venezuela. Perhaps one of the most prolific writers in Argentina, and certainly one of the most talked about in Latin America, Aira has published more than 100 books to date in Argentina, Mexico, Colombia, Venezuela, Chile, and Spain, which have been translated for France, Great Britain, Italy, Brazil, Portugal, Greece, Austria, Romania, Russia, and the United States. One novel, La prueba, has been made into a feature film, and How I Became a Nun was chosen as one of Argentina’s ten best books. Besides essays and novels Aira writes regularly for the Spanish newspaper El País. In addition to winning the 2021 Formentor Prize, he has received a Guggenheim scholarship, and was shortlisted for the Rómulo Gallegos prize and the Booker International Prize.

Chris Andrews was born in Newcastle, Australia, in 1962. He studied at the University of Melbourne and taught there, in the French program, from 1995 to 2008. He also taught at the University of Western Sydney, where he was a member of the Writing and Society Research Center. As well as translating nine books by Roberto Bolano and ten books (and counting) by César Aira, he also brought the French author Kaouther Adimi’s Our Riches into English for New Directions. Andrews has won the Valle-Inclán Prize and the French-American Foundation Translation Prize for his translations. Additionally, he has published the critical studies Poetry and Cosmogony: Science in the Writing of Queneau and Ponge and Roberto Bolano's Fiction: An Expanding Universe as well as two collections of poems, Cut Lunch and Lime Green Chair, for which he won the Anthony Hecht Poetry Prize.

César Aira is an amazing writer whose works, of rare genius, are passed on as a secret among an ever-widening sect of enthusiasts.
— Josep Massot - La Vanguardia

Aira’s stories seem like fragments of an infinite and interconnected universe in constant expansion.
— Patti Smith