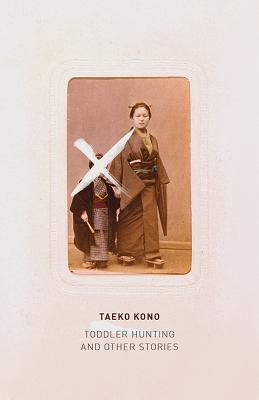 Surely this book's title already has your attention, so allow me to capture it for a moment longer. Taeko Kono's stories are serrated with a dissatisfied dread that threatens to erupt into violence. This volatility is feminine: plagued by the past and daunted by the future, the women who walk through these pages contend with the existential pressure of their gender, trying to let off steam as the men in their lives demean them and the time they have left on earth dwindles, day by day, second by slow second. One attends a magic show and becomes convinced that yes, she really did see a woman sawed into two bloody halves. Another pays visits to a couple she met at the theater, slowly becoming privy to their sadomasochistic routines and becoming a part of them herself. Restraint and release compose the heartbeat of Kono's writing as she reveals the livid pulp that pulses beneath women's quiet exteriors.

Toddler-Hunting and Other Stories introduces a startlingly original voice. Winner of Japan’s top literary prizes for fiction (among them the Akutagawa, the Tanizaki, the Noma, and the Yomiuri), Taeko Kono writes with a strange beauty, pinpricked with sadomasochistic and disquieting scenes.

In the title story, the protagonist loathes young girls, but compulsively buys expensive clothes for little boys so that she can watch them dress and undress. The impersonal gaze Taeko Kono turns on this behavior transfixes the reader with a fatal question: What are we hunting for? And why?

Multiplying perspectives and refracting light from the strangely facing mirrors of fantasy and reality, pain and pleasure, these ten stories present Kono at her very best.

Born in Tokyo, Taeko Kono (1926–2015) was “one of the most significant feminist writers of postwar Japan” (Japan Times).

Lucy North is a Japanese translator and editor based in the southeast of England.

Japanese master of the unsettling: Kono should be an electrifying discovery for English-speaking lovers of short fiction. Each story unburies something that feels both thrillingly specific and surprisingly contemporary.
— Kirkus (starred)

Provocative and eerily moving in their confrontation of the terrifying and the taboo. Each of Kono’s stories features characters confronting new ways to live with their own secret selves: a strikingly original and surprising collection.
— Publishers Weekly (starred)

Both the sadism and masochism here is very raw—but pain and pleasure mingle in ways that never cease to be surprising or poetic.
— Thessaly La Force - T-Magazine

The fiery, beguiling stories in Toddler Hunting and Other Stories are vertiginous tightrope walks between two planes of reality. Kono’s writing is shocking, ominous, and subversive; it lays bare the destruction and the renewal that freedom and desire can cause.

Two currents are constantly crossing in the stories, the first depicting the polite forms of public interactions and the second pulsing with taboo fantasies and hallucinations. There are resonances here with Tanizaki, but Kono’s subversions feel somehow scarier, in part because of her deadpan prose and in part because she strikes at sacred paradigms of motherhood and femininity.
— The Wall Street Journal

I was not prepared for this unsettling and unforgettable collection. These stories left me shaken and in awe; they are incendiary, beautiful, and frightening confrontations of the lives we keep hidden from others. Taeko Kono fearlessly writes into the abyss, and there is no one like her.
— Gabe Habash, author of Stephen Florida

Kono’s unsparing gaze
penetrates the depths of human nature, and she sets forth what she finds there
with absolute precision.
— Shusaku Endo