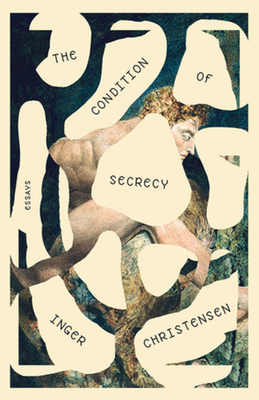 For the first time available in English, a selection of some of Inger Christensen’s most insightful essays and poetic prose pieces

The Condition of Secrecy is a poignant collection of essays by Inger Christensen, widely regarded as one of the most influential Scandinavian writers of the twentieth century. As The New York Times proclaimed, “Despite the rigorous structure that undergirds her work—or more likely, because of it—Ms. Christensen’s style is lyrical, even playful.” The same could be said of Christensen’s essays. Here, she formulates with increasing clarity the basis of her approach to writing, and provides insights into how she composed specific poetry volumes. Some essays are autobiographical (with memories of Christensen’s school years during the Nazi occupation of Denmark), and others are political, touching on the Cold War and Chernobyl. The Condition of Secrecy also covers the Ars Poetica of Lu Chi (261-303 CE); William Blake and Isaac Newton; and such topics as randomness as a universal force and the role of the writer as an agent of social change. The Condition of Secrecy confirms that Inger Christensen is “a true singer of the syllables” (C. D. Wright), and “a formalist who makes her own rules, then turns the game around with another rule” (Eliot Weinberger).

Inger Christensen (1935– 2009), whose work is a cornerstone of modern Scandinavian poetry, was the recipient of many international awards, among them the Nordic Authors’ Prize, bestowed by the Swedish Academy and known as the “Little Nobel.” Her books include the masterpiece it; alphabet; Butterfly Valley; and Light, Grass, and Letter in April.

Susanna Nied's work has appeared in various literary journals and anthologies. Her translation of It won the Harold Morton Landon Translation Award in 2007.

One of Scandinavia’s finest experimental poets, Christensen’s probing, questioning, hopeful voice was an important one and is missed, but we can still hear it in this provocative book. A poet who was definitely not living in an ivory tower.
— Kirkus

What sets Christensen above other poets, moralists, mystics, and scientists is that she rarely instructs by telling how to see, but instead gets readers to experience an alternate way of seeing through the reading of her verse. From one essay to the next, her luminous prose (conveyed in graceful, intimate English by her longtime translator Susanna Nied) confirms what was already evident in the poems: that Christensen was one of the eminent visionaries of the 20th century.
— Los Angeles Review of Books

Christensen is at her most intriguing when posing questions, as when she wonders, 'Does art originate from the same necessity that gives rise to beehives, the songs of larks, and the dances of cranes?' and asking whether it is possible to write poetry that is compelling if read 'out loud to a cockroach?' These borderline silly yet profoundly imaginative questions make for a thought-provoking reading experience.
— Publishers Weekly

Like all Christensen's writing, The Condition of Secrecy aims to be a history of no less than everything: the origins of the stars and our souls, the beauty of fractals and of third-century Chinese poetry. It is a book about eating strawberries, witch-burning and the challenge that the soft, scumbled sides of clouds pose to geometry. It’s about standing in the garden and watching yellow slugs 'moving like slow flames' in sunlight. It’s a hectic kind of erudition that could easily seem showy, but in these essays we experience it as a kind of abundance, an outpouring of love for the world. Nied’s clean, musical translation helps. There is nothing knotty, nothing strained. The arguments radiate outward with the measured rhythm of ripples in water.

Inger Christensen manages to make wit, passion
and questioning, and astonishing design serve each other’s ends as one, and she
does it in a way that is utterly her own.
— W. S. Merwin