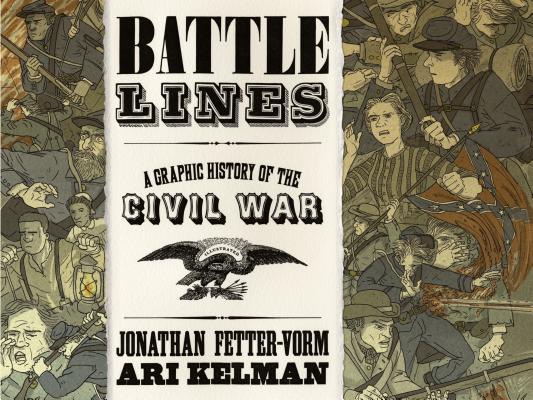 A collaboration between the award-winning historian Ari Kelman and the acclaimed graphic novelist Jonathan Fetter-Vorm, Battle Lines showcases various objects from the conflict (a tattered American flag from Fort Sumter, a pair of opera glasses, a bullet, an inkwell, and more), along with a cast of soldiers, farmers, slaves, and well-known figures, to trace an ambitious narrative that extends from the early rumblings of secession to the dark years of Reconstruction. Employing a bold graphic form to illuminate the complex history of this period, Kelman and Fetter-Vorm take the reader from the barren farms of the home front all the way to the front lines of an infantry charge.

A daring presentation of the war that nearly tore America apart, Battle Lines is a monumental achievement.

Jonathan Fetter-Vorm is an author and illustrator. His Trinity: A Graphic History of the First Atomic Bomb was selected by the American Library Association as a Best Graphic Novel for Teens in 2013. He lives in Brooklyn, New York.

Ari Kelman is the McCabe Greer Professor of the Civil War Era at Penn State University and the author of A River and Its City and A Misplaced Massacre, winner of the Bancroft Prize and the Avery O. Craven Award. He is a regular contributor to The Times Literary Supplement and has written for The Nation, Slate, and The Christian Science Monitor, among other publications. He lives in State College, Pennsylvania, with his wife and two sons.

Jonathan Fetter-Vorm is an author and illustrator. His Trinity: A Graphic History of the First Atomic Bomb was selected by the American Library Association as a Best Graphic Novel for Teens in 2013. He lives in Brooklyn, New York.

“A remarkable achievement both as a work of history and visual literature, providing a broad overview of the complex circumstances that gave rise to the bloodiest conflict in American history, while simultaneously making those deaths meaningful by capturing fleeting moments amid the slaughter in panels so beautifully wrought as to beggar description.” —Scott Eric Kaufman, Salon

“Academic history at its finest . . . a remarkable—and beautiful—book . . . Battle Lines should be required reading in graduate historiography and teaching courses. It is a tribute to Fetter-Vorm and Kelman that I want copies of the book displayed on my academic bookshelf, in my classroom, and on my coffee table.” —David Schieffler, The Civil War Monitor

“A graphic rendering of epic destruction and intimate despair, as the authors make Civil War scholarship come alive for readers young and old. The artistry of Fetter-Vorm powerfully captures the devastation that the war wreaked on the country, extending well past the armistice, while the historical context by Bancroft Prize winner Kelman provides the contextual depth . . . . In this gripping graphic narrative, the complexities of history achieve clarity, and the depth of the tragedy has a visceral impact.” —Kirkus Reviews (starred review)

“In 15 harrowing chapters, Fetter-Vorm and Ari Kelman's graphic take on the Civil War brings home the shattering costs of America's epochal conflict like almost no other single-volume history . . . Poignant and heartbreaking.” —Publishers Weekly

“Battle Lines is not the first graphic novel about the Civil War, but it is one of the most ambitious. Rather than following a single wartime plot, Battle Lines spans from Congress's 1808 ban on the importation of slaves to the end of Reconstruction in 1876. Readers get concise and useful overviews of seminal moments in the war via newspaper pages that precede each chapter.” —Kenyon Gradert, Los Angeles Review of Books

“Powerful and evocative . . . This book belongs in every school library in the country and on the shelf of anyone interested in good art, excellent storytelling, and careful scholarship.” —Matthew Helmke

“A fascinating look at one of the biggest events in United States history . . .The gut-punches started and they simply didn't end until the conclusion of the book . . . I'd highly recommend it.” —Janelle Asselin, Comics Alliance

“Battle Lines brings us the Civil War as we've never seen it before. An inspired blend of images and words, this fresh, vivid history is the perfect primer for students and devotees of America's greatest conflict.” —Tony Horwitz, author of Confederates in the Attic and Midnight Rising

“Battle Lines is the best film about the Civil War that has never been made. It is a penetrating account of the war's deepest dramas, told in the fewest words imaginable. It is history as poetry.” —Stephen Kantrowitz, Professor of History, University of Wisconsin-Madison, and author of More Than Freedom

“Featuring inspired storytelling and haunting images, Battle Lines is the best graphic novel ever produced about the Civil War.” —Josh Neufeld, author of A.D.: New Orleans After the Deluge