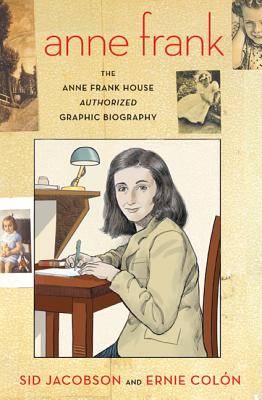 Drawing on the unique historical sites, archives, expertise, and unquestioned authority of the Anne Frank House in Amsterdam, New York Times bestselling authors Sid Jacobson and Ernie Colón have created the first authorized and exhaustive graphic biography of Anne Frank. Their account is complete, covering the lives of Anne's parents, Edith and Otto; Anne's first years in Frankfurt; the rise of Nazism; the Franks' immigration to Amsterdam; war and occupation; Anne's years in the Secret Annex; betrayal and arrest; her deportation and tragic death in Bergen-Belsen; the survival of Anne's father; and his recovery and publication of her astounding diary.

Sid Jacobson was the managing editor and editor in chief for Harvey Comics, where he created Richie Rich, and executive editor at Marvel Comics. With Ernie Colón he created The 9/11 Report: A Graphic Adaptation and Anne Frank: The Anne Frank House Authorized Graphic Biography.

Ernie Colón (1931-2019) is the illustrator of the New York Times bestseller The 9/11 Report: A Graphic Adaptation, After 9/11, Che, and Anne Frank (all published by Hill and Wang). He has worked at Marvel Comics, where he oversaw the production of Spider-Man, and at DC Comics, where he did the same for Green Lantern, Wonder Woman, Blackhawk, and the Flash.

“The full-color graphic biography of Anne, whose Holocaust-era diary has been read by millions, goes beyond the time period she recounts… It brings to life the story of the Frank family, [and] is as visually and historically accurate as possible -- down to the clothing worn by the Franks, the military uniforms of the Nazis, the furniture and layout of the Franks' secret apartment, and Bergen-Belsen, the camp where Anne died in March 1945 at age 15.” —Carol Memmott, USA Today

“Rather than sentimentalizing Anne's story, Anne Frank: The Graphic Biography sets out to provide a historical context and is packed with snippets of information about significant events, ranging from the economic crisis of 1929 to Hitler's rise to power, from the 1935 Nuremberg Laws -- which excluded Jews from German society -- to the Wannsee Conference in 1942, when the Nazis drew up plans to exterminate Europe's Jews.” —Tristana Moore, Time