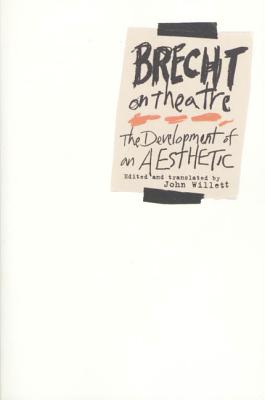 This volume offers a major selection of Bertolt Brecht's groundbreaking critical writing. Here, arranged in chronological order, are essays from 1918 to 1956, in which Brecht explores his definition of the Epic Theatre and his theory of alienation-effects in directing, acting, and writing, and discusses, among other works, The Threepenny Opera, Mahagonny, Mother Courage, Puntila, and Galileo. Also included is "A Short Organum for the Theatre," Brecht's most complete exposition of his revolutionary philosophy of drama.

Translated and edited by John Willett, Brecht on Theater is essential to an understanding of one of the twentieth century's most influential dramatists.

Bertolt Brecht (1898-1956) is acknowledged as one of the great dramatists whose plays, work with the Berliner Ensemble and critical writings have had a considerable influence on the theatre. His landmark plays include The Threepenny Opera, Fear and Misery of the Third Reich, The Life of Galileo, Mother Courage and Her Children and The Caucasian Chalk Circle.

John Willett (1917-2002) was the greatest English language authority on Brecht the writer and man of the theatre. The foremost translator and editor of Brecht's drama, poetry, letters, diaries, theatrical essays and fiction, Willett produced a dozen volumes for Methuen Drama on the greatest modern German writer.

Marc Silberman is Professor of German at the University of Wisconsin - Madison, USA. He is the co-editor of the completely revised and updated third edition of Brecht on Theatre and of Brecht on Performance (both 2014), and editor of Brecht on Film & Radio.