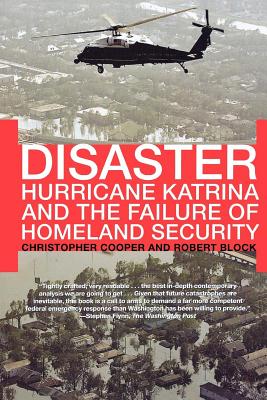 "[A] tightly crafted, very readable book . . . the best in-depth contemporary analysis we are going to get."
—Stephen Flynn, The Washington Post

When Hurricane Katrina roared ashore on August 29, 2005, federal and state officials were not prepared for the devastation it would bring. In this searing indictment of what went wrong, Christopher Cooper and Robert Block take readers inside FEMA and the Department of Homeland Security to reveal the inexcusable mismanagement during the crisis—the bad decisions that were made, the facts that were ignored, and the individuals who saw that the system was broken but did nothing to fix it.

In this award-winning and critically acclaimed book, Cooper and Block reconstruct the crucial days before and after the storm hit, laying bare the government's inability to respond to the most elemental needs. They also demonstrate how the Bush administration's obsessive focus on terrorist threats fatally undermined the government's ability to respond to natural disasters. The incompetent response to Hurricane Katrina is a wake-up call to all Americans, wherever they live, about how distressingly vulnerable we remain.

Christopher Cooper is a national political correspondent for The Wall Street Journal, where he has also been a White House correspondent, and a former political reporter for the New Orleans Times-Picayune.

Robert Block covers the Department of Homeland Security for The Wall Street Journal and is a former foreign correspondent who has reported from Europe, Africa, and the Middle East. He lives in Washington, D.C.