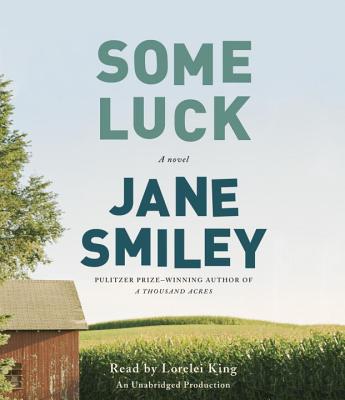 By Jane Smiley, Lorelei King (Read by)
Click on "Ask A Bookseller" to contact us via email for more information about this title.
Not In Store / May Not Be Available To Order (email orders@greenlightbookstore.com for details)

Longlisted for the 2014 National Book Award From the winner of the Pulitzer Prize a powerful, engrossing new novel--the life and times of a remarkable family over three transformative decades in America. On their farm in Denby, Iowa, Rosanna and Walter Langdon abide by time-honored values that they pass on to their five wildly different children: from Frank, the handsome, willful first born, and Joe, whose love of animals and the land sustains him, to Claire, who earns a special place in her father's heart. Each chapter in Some Luck covers a single year, beginning in 1920, as American soldiers like Walter return home from World War I, and going up through the early 1950s, with the country on the cusp of enormous social and economic change. As the Langdons branch out from Iowa to both coasts of America, the personal and the historical merge seamlessly: one moment electricity is just beginning to power the farm, and the next a son is volunteering to fight the Nazis; later still, a girl you'd seen growing up now has a little girl of her own, and you discover that your laughter and your admiration for all these lives are mixing with tears. Some Luck delivers on everything we look for in a work of fiction. Taking us through cycles of births and deaths, passions and betrayals, among characters we come to know inside and out, it is a tour de force that stands wholly on its own. But it is also the first part of a dazzling epic trilogy--a literary adventure that will span a century in America: an astonishing feat of storytelling by a beloved writer at the height of her powers. From the Hardcover edition.

Jane Smiley is the author of numerous novels, including A Thousand Acres, which was awarded the Pulitzer Prize, as well as five works of nonfiction and a series of books for young adults. In 2001 she was inducted into the American Academy of Arts and Letters, and in 2006 she received the PEN USA Lifetime Achievement Award for Literature. She lives in Northern California.