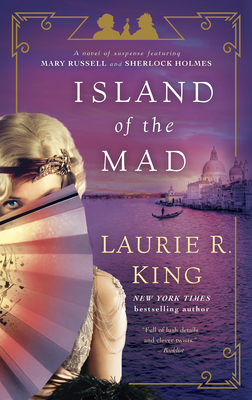 This is book number 15 in the Mary Russell and Sherlock Holmes series.

The last thing Mary Russell and her husband, Sherlock Holmes, need is to help an old friend with her mad, missing aunt. Lady Vivian Beaconsfield has spent most of her adult life in one asylum after another, since the loss of her brother and father in the Great War. Although her mental state seemed to be improving, she’s now disappeared after an outing from Bethlem Royal Hospital . . . better known as Bedlam.

Russell wants nothing to do with the case—but she can’t say no. To track down the vanished woman, she must use her deductive instincts and talent for subterfuge—and enlist her husband’s legendary prowess. Together, the two travel from the grim confines of Bedlam to the murky canals of Venice—only to find the shadow of Benito Mussolini darkening the fate of a city, an era, and a tormented English lady of privilege.

Praise for Island of the Mad

“A truly memorable mystery . . . Laurie King brings her always amazing imagination to the page to enthrall readers, as only she can do.”—Suspense Magazine

“Superb . . . shocking . . . Come for the mystery, stay for the sightseeing, the gibes at fascism, and the heroine’s climactic masquerade as silent film star Harold Lloyd.”—Kirkus Reviews

“There’s no shortage of entertainment. . . . If you are a fan of the series, you won’t be disappointed!”—San Francisco Book Review

“Well-plotted . . . This ranks as one of the better recent installments in this popular series.”—Publishers Weekly

“[The Mary Russell series is] the most sustained feat of imagination in mystery fiction today.”—Lee Child

“Superb . . . shocking . . . Come for the mystery, stay for the sightseeing, the gibes at fascism, and the heroine’s climactic masquerade as silent film star Harold Lloyd.”—Kirkus Reviews

“[Laurie R.] King’s storytelling is always a pleasure, full of lush details and clever twists. Cole Porter, who is an integral part of the book’s LGBTQ story line, adds an unexpected and welcome star turn.”—Booklist

“Well-plotted . . . This ranks as one of the better recent installments in this popular series.”—Publishers Weekly

Praise for the award-winning novels of Laurie R. King

“The great marvel of King’s series is that she’s managed to preserve the integrity of Holmes’s character and yet somehow conjure up a woman astute, edgy, and compelling enough to be the partner of his mind as well as his heart.”—The Washington Post Book World

“A lively adventure in the very best of intellectual company.”—The New York Times

“Erudite, fascinating . . . by all odds the most successful re-creation of the famous inhabitant of 221B Baker Street ever attempted.”—Houston Chronicle

“Will have [fans diving in] with reckless abandon.”—Booklist (starred review)