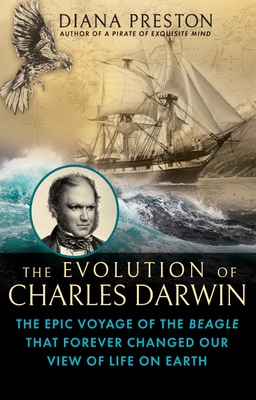 From the Los Angeles Times Book Prize-winning historian, the colorful, dramatic story of Charles Darwin's journey on HMS Beagle that inspired the evolutionary theories in his path-breaking books On the Origin of Species and The Descent of ManWhen twenty-two-year-old aspiring geologist Charles Darwin boarded HMS Beagle in 1831 with his microscopes and specimen bottles--invited by ship's captain Robert FitzRoy who wanted a travel companion at least as much as a ship's naturalist--he hardly thought he was embarking on what would become perhaps the most important and epoch-changing voyage in scientific history. Nonetheless, over the course of the five-year journey around the globe in often hard and hazardous conditions, Darwin would make observations and gather samples that would form the basis of his revolutionary theories about the origin of species and natural selection.Drawing on a rich range of revealing letters, diary entries, recollections of those who encountered him, and Darwin's and FitzRoy's own accounts of what transpired, Diana Preston chronicles the epic voyage as it unfolded, tracing Darwin's growth from untested young man to accomplished adventurer and natural scientist in his own right. Darwin often left the ship to climb mountains, navigate rivers, or ride hundreds of miles, accompanied by local guides whose languages he barely understood, across pampas and through rainforests in search of further unique specimens. From the wilds of Patagonia to the Gal pagos and other Atlantic and Pacific islands, as Preston vibrantly relates, Darwin collected and contrasted volcanic rocks and fossils large and small, witnessed an earthquake, and encountered the Argentinian rhea, Falklands fox, and Gal pagos finch, through which he began to discern connections between deep past and present.Darwin never left Britain again after his return in 1836, though his mind journeyed far and wide to develop the theories that were first revealed, after great delay and with trepidation about their reception, in 1859 with the publication of his epochal book On the Origin of Species. Offering a unique portrait of one of history's most consequential figures, The Evolution of Charles Darwin is a vital contribution to our understanding of life on Earth.

DIANA PRESTON is a prize-winning historian and the author of Eight Days at Yalta, A Higher Form of Killing, Lusitania: An Epic Tragedy, Before the Fallout: From Marie Curie to Hiroshima (winner of the Los Angeles Times Book Prize for Science and Technology), The Boxer Rebellion, Paradise in Chains, and A Pirate of Exquisite Mind, among other works of acclaimed narrative history. She and her husband, Michael, live in London.