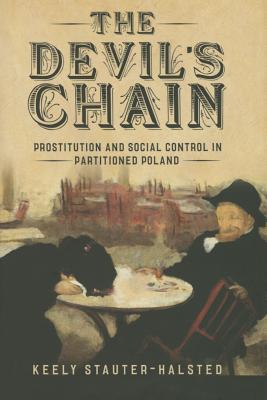 By Keely Stauter-Halsted
Click on "Ask A Bookseller" to contact us via email for more information about this title.

In the half-century before Poland's long-awaited political independence in 1918, anxiety surrounding the country's burgeoning sex industry fueled nearly constant public debate. The Devil's Chain is the first book to examine the world of commercial sex throughout the partitioned Polish territories, uncovering a previously hidden conversation about sexuality, gender propriety, and social class. Keely Stauter-Halsted situates the preoccupation with prostitution in the context of Poland's struggle for political independence and its difficult transition to modernity. She traces the Poles' growing anxiety about white slavery, venereal disease, and eugenics by examining the regulation of the female body, the rise of medical authority, and the role of social reformers in addressing the problem of paid sex.Stauter-Halsted argues that the sale of sex was positioned at the juncture of mass and elite cultures, affecting nearly every aspect of urban life and bringing together sharply divergent social classes in what had long been a radically stratified society. She captures the experiences of the impoverished women who turned to the streets and draws a vivid picture of the social milieu that shaped their choices. The Devil's Chain demonstrates that discussions of prostitution and its attendant disorders--sexual deviancy, alcoholism, child abuse, vagrancy, and other related problems--reflected differing visions for the future of the Polish nation.

Keely Stauter-Halsted is Professor of History and Stefan & Lucy Hejna Family Chair in the History of Poland at the University of Illinois at Chicago. She is the author of The Nation in the Village: The Genesis of Peasant National Identity in Austrian Poland, 1848-1914, also from Cornell.