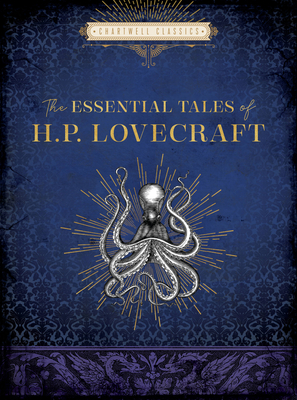 There is no better place to begin exploring the cosmic horror and eldritch tales of Lovecraft than in this exquisitely dark collection.

The Essential Tales of H. P. Lovecraft collects one of the author’s most popular novellas and six of his most famous short stories. Venture into his macabre world with these classics:

…if you dare. These hair-raising tales have inspired generations of authors and filmmakers, including Stephen King, Alan Moore, Guillermo del Toro, and Neil Gaiman. This elegantly designed edition features an introduction by H. P. Lovecraft scholar Peter Cannon and a timeline of Lovecraft’s life at the back.

Other titles in the Chartwell Classics Series include: The Essential Tales & Poems of Edgar Allen Poe; Emma; The Federalist Papers; The Inferno; The Call of the Wild and White Fang; Moby Dick; The Odyssey; Pride and Prejudice; Grimm’s Fairy Tales; The Alchemist; The Great Gatsby; The Secret Garden; Anne of Green Gables; The Phantom of the Opera; The Communist Manifesto and Das Kapital; The Republic; Frankenstein; Twenty Thousand Leagues Under the Sea; The Picture of Dorian Gray; Meditations; Alice’s Adventures in Wonderland and Through the Looking-Glass; A Tales of Two Cities; Beowulf; The Strange Case of Dr. Jekyll and Mr. Hyde; Adventures of Huckleberry Finn; Little Women; Wuthering Heights; Peter Pan; Persuasion; Aesop’s Fables; The Constitution of the United States and Selected Writings; Crime and Punishment; Dracula; Great Expectations; The Iliad; Irish and Fairy Folk Tales; The Legend of Sleepy Hollow; The War of the Worlds; and The Time Machine and The Invisible Man.

Howard Phillips “H. P.” Lovecraft (August 20, 1890–March 15, 1937) was an American author who achieved posthumous fame through his influential works of horror fiction. Virtually unknown and only published in pulp magazines before he died in poverty, he is now widely seen as one of the most significant twentieth century authors in his genre.